Of Institutional Resilience: Multiple Roles of a Ministry 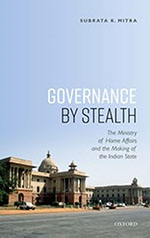 Of Institutional Resilience: Multiple Roles of a Ministry
Ajay K Mehra
GOVERNANCE BY STEALTH: THE MINISTRY OF HOME AFFAIRS AND THE MAKING OF THE INDIAN STATE by Subrata K. Mitra Oxford University Press, New Delhi, 2021, 476 pp., 2295.00
September 2022, volume 46, No 9

The legislative initiatives of the Narendra Modi government in the cases relating to CAA/NRC,  the repeal of Articles 370 and 35A of the Constitution of India and the speeches made by Union Home Minister Amit Shah, while raising plenty of heat and dust, also highlighted the significance and the reach of the Union Ministry of Home Affairs (MHA) in the constitutional and political affairs of the country.  The significance of the MHA was also witnessed in deciding to crack down on the anti-CAA stir across the country.  However, while studies on its components such as the police and the Central Armed Police Forces (CAPF) as well as dealing with the Maoist movement have been made, the MHA was not researched and studied in its entirety till Subrata K Mitra came out with the comprehensive study under review here.

One of the largest Ministries of the Government of India, the Ministry of Home Affairs (MHA), has a long history, going back to the gradual deepening and expanding roots of the East India Company from Fort William in Calcutta (Kolkata) in 1748 to the entire country by 1858.  Beginning as unnamed, it was referred to variously as ‘Publick’ Department (1764), ‘Home’ Department (1843) and as the Ministry of Home Affairs following Independence in 1947.  It assumed significance in 1947 under Sardar Vallabhbhai Patel, the most illustrious ever to be given charge of the Ministry, as the Ministry of Home and States, dealing with post-Partition violence and the integration and reorganization of the States. The most authentic revelation in this study is how with an unnamed beginning and with a queer nomenclature, a department of the colonial government has evolved eventually into a crucial Ministry of a just decolonized independent and diverse nation seeking to forge unity to walk on the path of development in a multicultural society.  Subrata K Mitra’s comprehensive and in-depth study using archived files relating to the Ministry is indeed a herculean effort to bring this Ministry into academic discourse.  He describes its function as ‘governance by stealth’—‘the use of minimum force to generate maximum order’ (p. 1).  Spread over twelve chapters and a Conclusion, this comprehensive and monumental study of one of the key institutions of Government of India is a pioneering work that unravels several myths, answers the maximum possible questions and describes all its functions in historical and institutional contexts on the governance of order and management of complex issues in the country.  Based on archival research, it is as authentic as it could be.