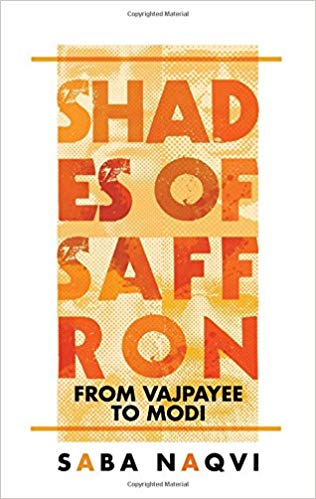 One of the main challenges the institutions of Indian democracy are facing is the decline of the liberal professions. Journalists, lawyers, professors were supposed to be the front line of the army fighting for the rights of the governed. Today, they are seen more as collaborators of the governors. Why that is so is the subject matter of a separate debate.

However, one reason is certainly worth exploring. The powerful and influential sections of these professions seem to be divorced from a serious pursuit of scholarship without which these professions can only produce technicians who, at their best, will be useful tools for their employers but will have nothing to contribute to our collective life.

Senior journalist Saba Naqvi’s latest book, Shades of Saffron: From Vajpayee to Modi traces the journey of the BJP governments and politics from the Vajpayee era to Modi. The initial chapters of the book are set in the late 90s and deal with personalities and events which have been important milestones in the emergence of the BJP as the pre-eminent pan Indian political party. Saba writes with sufficient sympathy for many BJP leaders with whom she is ideologically not in sync like Vajpayee, Advani, Govindacharya, except Modi. She is an engaging storyteller. Written in a conversational, journalistic style with the inevitable dose of power gossip, the book reads like a story and is fairly informative. But it remains a fact based journalistic work and does not attempt any deep or long term political, historical analysis of the tectonic movements of Indian politics in the last couple of decades.