Of a Kingdom in Flux 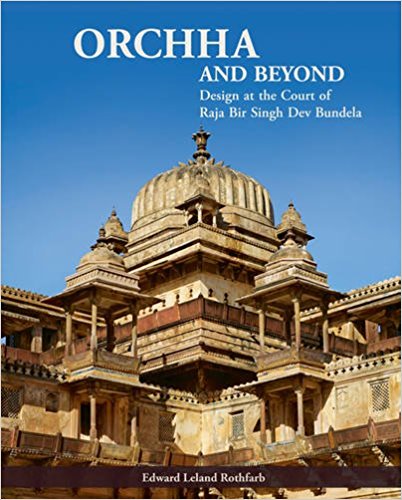 Many of us have heard of Orchha—perhaps as a vacation spot dotted with notable architecture. But few of us might be aware of the turbulent history of this kingdom and how its champion, Raja Bir Singh Dev Bundela (r. 1604-1627) shaped it into the jewel it is today.

Orchha and Beyond: Design at the Court of Raja Bir Singh Dev Bundela is handsomely published by Marg with generous support from the veteran Sir Ratan Tata Trust and Shree Ram-anugrah Trust—a non-profit NGO established about five years ago devoted to promote Indian culture. Independent scholar Edward Leland Rothfarb begins the book by quickly establishing a vivid socio-political setting to transport the reader into medieval Central India. Through a summary of five chapters at the end of the Introduction, the author offers glimpses of what awaits a reader.
This book will appeal to those interested in not just the history of Central Indian provinces but Mughal history alike as it succeeds in stirring memories of the times, presenting a lively picture of the fabulous but ruthless Mughals constantly at war with the Rajputs and their fascinating relationship ari-sing from this exchange.

Not a fresher to the theme or time, Rothfarb deftly presents the Orchha kingdom under Bir Singh Dev Bundela in the broader setting of (appropriately referred to as) ‘Hindus-tan’ instead of ‘India’. Rothfarb’s first book In the Land of the Taj Mahal (1998, Henry Holt and Co.) spanned two centuries of Mughal rule in India. In this book, the author draws effort-lessly from leading contemporary historians such as George Michell (The Majesty of Mughal Decoration, 2007) and Ebba Koch (Jahangir and the Angels, 2001) to the 16th century Mughal chronicler Abu’l Fazl and Orchha poet, Keshavdas.