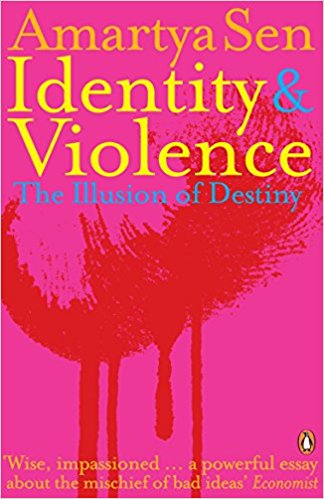 Professor Amartya Sen interrogates a large number of ideas in currency in the contemporary world including the tendency to categorize individuals and communities based on one overarching identity, clash of civilizations, multiculturalism, the presumed superiority of the West, terrorism emanating from religious fundamentalism and the like. As a review is constrained by limitations of space I shall rest content by discussing some of them.

One of the points which comes for persistent comments in the book is the phenomenon of multiple identities. (In fact identity, role and value orientation are often conflated but I shall let that pass). This is an obvious fact; indeed commonplace. Even if one confines one’s analysis to the institution of family it is clear that a woman can be at once a wife, mother, grandmother, mother-in-law, sister, sister-in-law, daughter, daughter-in-law to list a few. If the relationship between mother-in-law and daughter-in-law is widely perceived to be tension generating, the relationship between mother and daughter is usually not.

As the canvass of an individuals’ sphere of activities expand to neighbourhood, work, recreation and worship her ‘identities’ increase. And it is indeed simplistic to identify an individual in terms of one master identity or role and hence one need not labour this point.

What is true of individuals is also true of groups and communities. But there is a critical difference; while the integrity of the unit of analysis remains intact in the case of individuals, the group/community gets distributed into different categories. A religious community usually belongs to different linguistic groups and regions, classes and occupations, age and sex groups. To categorize a group/community exclusively in terms of one of the above features is not to deny that it has a conglomerate of attributes but to highlight its differences with other similar groups on a particular attribute. Thus different classes, age-groups, races, religious communities, linguistic groups, occupational groups etc., are juxtaposed. But they do share critical minimum common attributes. Thus a religious community has shared canonical rituals in spite of its numerous internal differentiations.

Given the announced purpose of the book (although it arrives rather late) it is necessary to ask and answer the question which of the identities are instrumental in fomenting violence? Sen writes: ‘The subject of this book—ideas of identities and their relation to violence in the world—is closely linked…’(pp.149-50). It is absolutely clear that the violence generated through interpersonal role-playing (identities?) is not the focus of the book, but identity-clashes between groups, notably religious communities, form its kernel. Therefore, to understand the link between identity and violence the attention should shift from individual identity to collective identity. One of the recurring themes discussed at length in the book is that of ‘clash of civilizations’ by Samuel Huntington.

Huntington’s thesis that the contemporary world is characterized by clash of civilizations based on religious collectivities anchored to geographic regions is empirically wrong for several reasons. First, ever since the geographical explorations of the 16th century and colonialism which followed it the co-terminality between geography and religion is substantially disturbed; de-territorialization of religion is an accomplished fact. Second, all religious communities are internally differentiated based on denominations and sects and the clash between them (eg., Shias and Sunnis, and both of them vis-à-vis the Ahmedias among Muslims or Catholics and Protestants among Christians to cite just two examples) could be more virulent. Third, the clashes also trigger off and persist within the civilizational regions as manifested by the cases of Ireland, Sri Lanka and Kashmir. Fourth, some of the most bloody clashes are between peoples who belong to the same religious denominations; both Hutus and Tutsis are Catholics. Therefore, Sen is correct in his conclusion that ‘…the “civilizational” approach to contemporary conflicts…serves as a major intellectual barrier to focusing more fully on prevailing politics and to investigating the processes and dynamics of contemporary incitements to violence’ (p.43).

Collective identities as such do not produce violence but when they are linked to state-making and nation-building they do. The colonial states produced or favoured the construction of a series of dichotomies, civilized versus savage, white versus black, occidental versus oriental, stigmatizing the latter in each of these pairs. If in the New World—the Americas, Australia and New Zeland—both genocide and culturocide (systematic liquidation of cultures of the smaller and weaker groups) were indulged in, in Black Africa, through a process of reckless vivisection of tribes and apportioning them to different colonial states of Europe the integrity of African nations were endangered. In Asia a process of stigmatizing the ancient civilizations was the instrument invoked. Sen hardly pays any attention to this although he rightly castigates the West for its claimed superiority.

Collective identities, particularly national identities, were either privileged or stigmatized by Marx and Engels in the process of establishing socialist states based on proletarian internationalism. According to them Germans, Italians, Magyars and Poles represented the forces of enlightenment. Russian and Slavic nations represented the dark forces. The two most ‘scoundrelly nations on earth’ were the Chinese and the Yankees. Marx and Engels referred to the less developed nations as ‘people without history’, ‘remains of nations’, ‘ruins of people’ and so on. Great nation chauvinism played a significant role in the breaking up of socialist states.

Project homogenization pursued by the much acclaimed nation-states of West Europe also produced enormous violence anchored to collective identity. The first nation of the world, namely Britain, completely decimated the linguistic identity of Scotland, Wales and Ireland. France, the land of revolution, had culturally liquidated Alsations, Bretons, Corsicans, Occitanians and vivisected Basques and Catalans between the French and the Spanish states. When modern Italy emerged only three percent of people spoke Italian and the populist cry was: “We have Italy, we need to create Italians now!”

The point I am making is that state building—colonial, socialist and national—produced enormous violence anchored to collective identities. Therefore, one legitimately expected an analysis of these in a book on identity and violence. And Sen’s silence regarding the European violence, both socialist and nationalist, is indeed intriguing. This brings me to the discussion on contemporary terrorism in the book. Politicization of religion, be it of Buddhism, Christianity, Hinduism, Islam or Judaism, produces violence. But when the religious category in question does not endorse a territorially anchored nation-state the dynamics of violence—its genesis, sites, spread and manifestation—vary. In Islamic theology, nation is an alien concept and the Islamic identity conceptualized through the notion of Ummah is a universal identity. Therefore the martyrs of faith are not obliged to defend the territory of the nation but are expected to protect co-religionists and avenge the enemies of faith everywhere. This probably explains the spatial spread of violence through the ‘true believers’ of Islam. But this does not warrant the characterization of the whole community of Muslims as violent or terrorist.

As most writers Sen too is primarily concerned with physical violence although structural violence too is recognized. But a third type of violence, namely symbolic violence, analysed at length by the French sociologist Pierre Bourdieu is pivotal in understanding collective violence. The fleeting reference made by Pope Benedict XVI, in September 2006, to a negative articulation made by Manual II Paleologus, the 14th century Christian emperor of Byzantine, about Prophet Mohammed led to massive collective protest all over the world. Similarly, neither The Satanic Verses nor The Davinci Code indulged in physical or structural violence but both committed symbolic violence leading to violent responses. Multiculturalism does not refer to celebration of every form of cultural inheritance; it does not endorse cultural relativism, which is the tendency to uphold cultural purity irrespective of the content of cultural practices. Thus practices such as sati, untouchability, racism, slavery, genital mutilation and the like which might have been integral aspects of one or another cultural tradition are not admissible under cultural pluralism. In fact culture change implies four interrelated processes. If reckless homogenizaiton and traditionalization foments violence, pluralization and hybridization brings about harmony. The point to be underlined is change attempted through imposition of culture by the state or the cultural mainstream is the source of violence; voluntary acceptance of culture change does not usually lead to violence. Does globalization produce violence? If globalization simply means connectivity and spread of ideas it always existed, although earlier connectivity was not complete and less intense. The crucial difference between contemporary globalization driven by aggressive market operations and high technology is that it is hegemonic as compared with the connectivity of an earlier era characterized by equity. Thus historian Abu-Lughod reports the existence of several circuits of connectivity in 13th century without anyone dominating; indeed a stark contrast to today’s uni-polar world. And Samuel Huntington wrote in his 1992 article which he published before the book: ‘To preserve Western civilization in the face of declining Western Power, it is in the interest of the U.S. and European countries… to maintain Western technological and military superiority over other civilizations’. Therefore, those who protest against globalization have good reasons to protest. While market fundamentalists advise the less developed countries to ‘catch up’, the anti-globalizers advocate ‘opting out’. The real option seems to be pursuing the middle path, ‘globalization with a human face’ to quote Prime Minister Dr. Manmohan Singh. As Sen concludes globalization need not be perceived as a western curse, it could be seem as an Eastern gift, if one views it from an earlier baseline. A retreat into the present can be myopic.

Finally, a word about ‘cultural federalism’ which Sen rejects. Invoking the example of Indian subcontinent he argues that religion was the basis of Partition riots in 1947 and language provided the motive for riots in 1971-72 in partitioning Pakistan. This means if any factor, be it religion, language or race, is invoked as the basis of perpetuating dominance in a polity it will irretrievably strain and even occasion the break up of the polity. This seems to be what is happening in Pakistan and Sri Lanka today to refer to only two of India’s immediate neighbours. On the contrary, if linguistic units within the polity are accommodated with equity, the polity may not only survive but thrive. This is exemplified by the examples of the ‘Union of Indian States’, to recall the constitutional expression and the European Union which are indeed instances of cultural federalisms. These are qualitatively different from the fashionable advocacy, ‘living together separately’, which will inevitably lead to divorce leading to violence. We need to foster political federalism, cultural pluralism, economic equity and social equality the combination of which will sustain authentic democratic polities.

Identity and Violence interrogates a collage of contemporary ideas by a world-class intellectual. It deserves to be read widely not so much for the answers it provides but for the questions it raises.

T.K. Oommen is a former president of International Sociological Association.