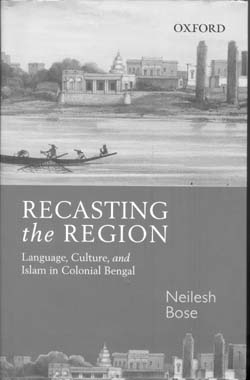 The self-fashioning of bhadralok Hindus in Bengal in the late nineteenth and early twentieth centuries, and their responses to colonial rule, is an area which is frequently traversed by researchers. Scholars such as Rafiuddin Ahmed, Sufia Ahmed, Jayanti Maitra, and Anisuzzaman have mainly concentrated on late nineteenth century Bengali Muslim society. Developments in the Bengali Muslim society throughout the nineteenth century have been covered by the late historian Amalendu De. The late historian, Chandi Prasad Sarkar, has dealt with the politicization of the Bengal Muslims during the first half of the twentieth century. Not much is known, however, about the impact of literary and cultural history on the identity formation of Bengali Muslims in the first half of the twentieth century. How did the Bengali intellectual traditions intersect with the idea of Pakistan in the years preceding the vivisection of India? What role did Bengali language and literature play in the political consciousness of the Bengal Muslims? In the light of these questions, the author endeav-ours to present a comprehensive analysis of Muslim political mobilization in late colonial Bengal. Bose argues that the notion of the separatist ‘Muslim’ state of Pakistan need not be exclusively studied in the context of developments in northern India. It would be useful to investigate how this notion emerged out of a sustained engagement with Bengali intellectual and literary traditions. Through an intensive analysis of the writings of Bengali Muslim politicians and intellectuals, the pursuit of folklore, literary modernism, and intellectual movements in both Dacca and Calcutta, this book aims at exploring the arena of the Bengali Muslim perspective.