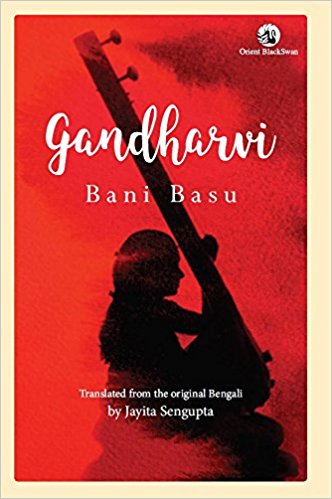 ‘If music be the food of love, play on’—William Shakespeare, Twelfth Night.

Bani Basu’s Gandharvi (Original Bengali Gandharbi) narrates the story of Apala, her life and her musical journey. The crests and falls of her life mirror the high and low notes that she is able to sing with equal elan; however, unfortunately, the notes of her life do not have an equally happy ending. The original Bengali version of the novel had been published in 1993, the English translation makes its way into the market 24 years later. A lot has changed in this period of post-liberalization India. The urban Indian landscape of 2017, while holding on to some aspects of the past is now syncretically different than in the 1990s. A protagonist like Apala, with limited self-agency would be much more common and ‘acceptable’ in the 1990s than she would be today.

Brought up under the strict guardianship of her ‘Jethu’ (father’s elder brother) after the death of her father, Apala lives in a family that has little appreciation for her talent and passion for classical music. The first seeds of conflict are sown when Apala, after winning a prestigious scholarship, wishes to go to Lucknow to study under the great Nazneen Begum, who is dismissed by her guardian as a ‘tawaif’. He wants to marry Apala off to the first family that shows interest in her—ironically because they saw her perform at the same function and her husband to be ‘decided’ to marry her.