Multiple Narratives of a Relief Camp 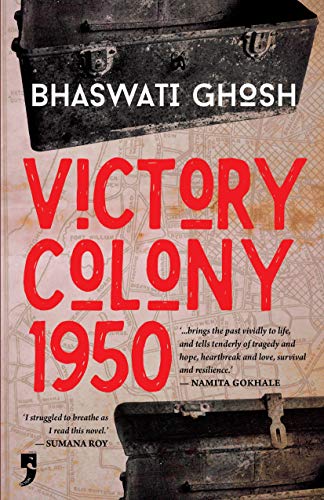 Victory Colony, 1950 is the story of Amala and Manas, whose lives intersect in a post-Partition relief camp, unfolding multiple other refugee stories with them as the novel progresses. Bhaswati Ghosh’s novel begins with the tragic event of forced migration of people from East Pakistan, across the borders of India, and draws its readers to witness the resilience of the refugees and an establishment of a colony. Unlike most fiction written on Partition, the novel consciously chooses to stay away from elaborate details on physical violence, accounts of looting and murders, or stories of exploitation. But that is not to say that Ghosh does not acknowledge events of corporal assaults, but carefully withdraws herself from providing readers with visual details of physical violence. In fact, the narrative of the novel seeps into the labyrinth of emotions and trauma that continues to haunt and exhaust its victims long after the assault. We see instances of trauma response that are triggered by banal activities and can immediately gauge the intensity of the violence that led to the reaction. Ghosh uses the subtlety of writing to expose the scars of emotional onslaught, often not visible to the naked eye though ever-present.

Early in the novel, we are invited to read Manas’s diary that gives an insight into refugee life from the vantage point of a relief worker. Through him, the readers witness the helplessness of relief workers, apathy of the government, and problems with the administration. As a person who has  deep empathy for refugees, Ghosh develops Manas’s character as more than an extension of the systemic order of relief workers. Unlike other administrative helpers at the camp, he vicariously lives the sufferings of forced migrants, and struggles to separate himself from the privileges he is surrounded with.