Mouse Attack is surely a window 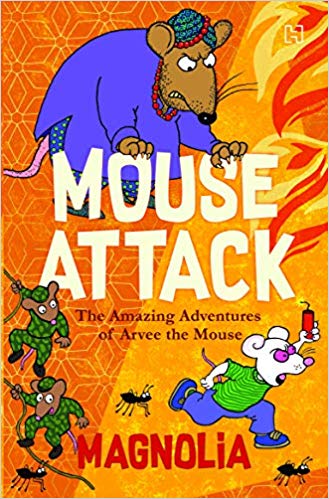 MOUSE ATTACK: THE AMAZING ADVENTURES OF ARVEE THE MOUSE

Mouse Attack is surely a window for children to enter into the world of fascinating images woven grippingly by Magnolia. It holds you tight with its enthralling narrative and lets you walk into the world of Arvee, Ellie, Mo and Pasha. Peeking through the eye of a mouse brings an interesting perspective of the human world as well as the small animal world. It thrills you with its one after the other incidents and succeeds well in keeping the suspense and adventure one looks for in juvenile fiction. All the 25 chapters try to firmly clutch you but one cannot stop reading after ‘Midnight Message’. This book is altogether an action-packed read with crisp chapters and cute illustrations but might restrict a few enthusiastic readers due to its fairly high price.

Arvee the scholarly white mouse brings his sophisticated laboratory experience into the life of underground mice submissive to their fate and horrifying past memories, not only to lead a resistance movement but also to explore his innate identity as an animal. It is difficult for Arvee to grasp all the difficult realities of animal kingdom beneath his human’s house and deal with the differences his skin colour has created. Meanwhile, in the world of little creatures, where ‘different’ is quite a synonym for ‘enemy’, Stringer being the leader of the family keeps his kin safe from the ‘different’ experiences Arvee has brought to their lives. On the way to smash the dichotomy of slaves and masters, Stringer doesn’t even realize when the ‘difference’ camouflages itself with the resistance against oppression and emerges as solidarity amongst all the mice.