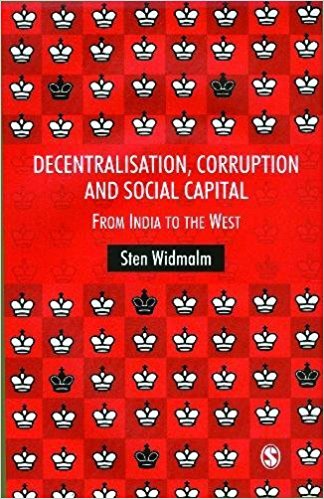 One of the challenges that seemed to have prompted Widmalm—a university teacher, to engage in this study was that the ‘intellectual climate in the field of development studies is in a rather poor condition in many Universities’. He also explains how he came upon the seemingly intriguing subject of his study: ‘The relationship between decentralization and corruption is receiving increased attention but there is still a dearth of well-designed studies… many actors, such as aid agencies, policy makers and financial institutions believe that decentralization policies and the phenomenon of corruption have a major influence on efforts to produce development’. So, apart from the university intellectuals, he also chose development actors—as another constituency for the product of his labour. These actors, says Widmalm, seem to see corruption as indisputably a leading factor holding back development in poor countries around the world, and decentralization has, since the 1990s in particular, been claimed to be one of the main means of preventing it.

In these circumstances India’s Panchayat Raj ‘reforms’ implemented since the mid-1990s, emerged as of particular interest to the author. But before gleaning from India’s experience, the study stretches itself to discuss ancient Rome, Greece and India and then move on to the West, China, Latin America and Russia ‘in order to apply those observations to its proposed “empirical study” in two Indian states—Kerala and Madhya Pradesh’.

Besides, he does not take on board the historical context specific to India. For example, he altogether misses the fact that the adoption of Panchayat Raj in India was an integral part of the system of governance which was to be adopted after Independence after the end of colonial rule. The context for it was not merely the place of the village in ancient India, but more importantly the colonial history. How did a small country like Britain located thousands of miles away succeed in colonizing India, was a haunting question pondered over during the freedom struggle. The answer to that question was that at the time that the British gained control over India, political power in the country was vested in just a few hands—maharajas, nawabs, feudal chiefs—who could be set one against the other, defeated, deceived or bought. The people at large had no political power or role in governance. Hence the moral drawn during the freedom struggle was that to guard independence, once it was attained, it was imperative that political power was not vested in fewer hands but in the hands of the masses of people—all adult citizens, men and women. Thus, India adopted adult franchise from day one to establish a representative and accountable system of governance. Besides, to fortify independence at the base, village panchayats were conceived and defined by the Constitution (Article 40) as ‘Units of self-government’.

The author not only misses all that, but begins his account in a tell-tale manner by recording the well-known differing views of Gandhi and Ambedkar on villages and Panchayats. He stops there and does not mention that whatever be his personal views about Panchayats which he did well to share publicly, Ambedkar put his seal on Article 40 of the Constitution mandating establishment of Panchayats:

The State shall take steps to organize village Panchayats and endow them with such powers and authority as may be necessary to enable them to function as units of self-government.

Nor does he go further on Gandhi’s views except caricaturing his position as ‘idealistic’. Gandhi had in fact underscored the role of village panchayats in the day-to-day affairs of the people:

I have not pictured a poverty-stricken India containing ignorant millions … establish village swaraj—make each village self- governing and self-contained as regards the essential needs of its inhabitants, especially food.

Similarly, Widmalm cryptically dismisses Nehru’s thinking. Nehru, he, says, was not interested in Panchayats since he was keen on ushering in the Soviet model of industrialization. Widmalm did not care to look at Nehru’s well-articulated position. (Resolution on Congress Objectives adopted by AICC, in November 1947, under Nehru’s Chairmanship):

Political Independence having been achieved, the Congress must address itself to the next great task, namely, the establishment of real democracy in the country and a society based on social justice and equality.

Such a society must provide every man and woman with equality of opportunity and freedom to work for the unfettered development of his or her personality. This can only be realized when democracy extends from the political to the social and the economic spheres.

Democracy in the modern age necessitates planned central direction as well as decentralization of political and economic power, in so far as this is compatible with the safety of the State, with efficient production and the cultural progress of the community as a whole.

The smallest territorial unit should be able to exercise effective control over its corporate life by means of a popularly elected Panchayat.

Widmalm starts his India account primarily with the arrival of 73rd/74th Amendments in the 90s. He describes these Constitution amendments as aimed at ‘bringing government closer to the people’.

Here again the author does not seem to have studied the vision and intent behind these amendments initiated by Rajiv Gandhi spelt out in his speech in Parliament on the occasion:

I toured hundreds of villages. I spoke to countless people. There, in their hearths and homes, I experienced the cruelty of an unresponsive administration, the oppression of an administration without a heart, the callous lack of compassion that most of our people find at the hands of much of our administration.

At the time Widmalm undertook the study, Panchayats had not yet been erected on the ground in depth or uniformly across the country as envisaged by the Constitution Amendment mooted by Rajiv. The author also does not seem to have taken note of the 2002 Report of the Standing Committee of Parliament which reviewed the 10-year progress of implementation of the 73rd Amendment (enacted in 1992) and found that the implementation was ‘woeful’ and Central and State Governments were wilfully thwarting the flow of mandated empowerment package in the hands of Panchayats to foster what was intended, namely, the birth of institutions of self-government.

That is a sad story. But implied that Panchayats, as envisaged by the Amendment had not yet come up in a meaningful way so as to be able to offer any clear or credible answers to Widmalm’s questions central to the purpose of his study. Given this ground reality, it was obviously premature for him to proceed with the India Study; and much less with the empirical survey in two states to ascertain the impact of ‘decentralization’ (Panchayat Raj) on democracy, or corruption and social capital. His exercise is of peripheral value to offer answers to the challenges which Widmalm had flagged, namely, to remove the poverty of intellectual vigour of the university studies and to provide some meaningful leads to development actors.

The airstrip was far from ready for him to land his craft.