Many Manifestations of Violence in Indian Society 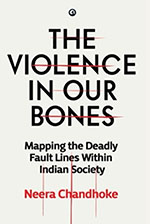 Many Manifestations of Violence in Indian Society
Swaha Swetambara Das
THE VIOLENCE IN OUR BONES: MAPPING THE DEADLY FAULT LINES WITHIN INDIAN SOCIETY by Neera Chandhoke Aleph Book Company, 2021, 242 pp., 699.00
Free Review of the Week

In The Violence in Our Bones: Mapping the Deadly Fault Lines Within Indian Society, Professor Neera Chandhoke compels us to deliberate on violence in its many manifestations in India and suggests how we may extricate ourselves from this abyss by inventively imagining participatory democracy. The treatment of violence in the social sciences often diminishes the starkness of human tragedy, when reduced to mere statistics. While recognizing that violent urges might lie dormant in our psyche, Chandhoke is concerned with stalling the eruption of these violent urges onto the socio-political arena. Her concern arises from the fact that while the causes of violence might be discernible, the trajectory of violence once unleashed is unpredictable and is difficult to be reined in.

The hesitation to place the problems of violence at centre stage of the Indian public discourse leads to the normalization of violence as if it were another form of politics. The author thus poses the question: ‘Why is violence bad politics?’ In her response, Neera Chandhoke skilfully navigates us through some of the most volatile exigencies of our Republic. The author weaves her trail with literary and poetic sources for asserting the urgency of a response for those suffering from violence.

Politics facilitates solidarities, community living, and empowers the citizens in being agents of political progress. But violence gnaws away at that agency of the citizens. It even injures bystanders. The spectacle of everyday violence that we are familiar with makes us almost as vulnerable as the victims themselves. The antidote to violence is in acknowledging the ramifications of citizenship in a democratic republic and in recognizing the purpose of the democratic state as an upholder of justice.

Chandhoke spells out the implications of adopting a democratic Constitution for India, which signified dual contracts. The first contract is between the people and the government, both the present and future. This contract limits the powers of the government through a system of checks and balances as well as through many institutions of the state and civil society. The second contract is the one that we as citizens make with each other—to respect, to empathize, and to be responsible to one another. While the violent instinct might be latent in us, we must still recognize our mutual obligations to each other. This recognition may lead to a renunciation of violence within our polity.

This book has six chapters, besides the introduction and the conclusion. The first chapter titled ‘India’s Partition’ alludes to the arbitrary nature of partitioning India into two dominions without including the affected inhabitants of the partitioned territories in the decision-making process concerning Partition. The Partition of India led to the reproduction of banal violence: ethnic cleansing and sexual violence against women. It was not a one-off moment. Rather, its effects were carried over into the nation-states that emerged. The tragedy of India’s Partition, which persists, is not merely the loss of people and territory, but also the loss of the spirit of coexistence, friendships, solidarities and the art of compromise in a context of plurality.

In ‘The Legacy of Communal Conflict’, Chandhoke contends that while Indians acceded to nonviolence as part of their struggle against colonialism, they failed to make it an indispensable part of their inter-community relationships. We continue to smart under the legacies of colonial rule that introduced the essentializing categories of Hindus and Muslims and led to a sharpening of these identities. She wonders how communal riots may be understood. Are these episodic abnormalities of our polity? Or are they part of our everyday life, arising out of the project of living together? Chandhoke asserts that while India might be a plural society, it has not axiomatically led us to esteem pluralism and tolerance.

Chandhoke asserts that laws and formal rights are inadequate for dealing with questions of caste discrimination and violence in the chapter, ‘Caste-based Violence’. Redistribution of material resources without a concomitant accordance of respect to individuals does not sufficiently meet the demands of justice. The insidious motive underlying caste violence is ‘to redraw the normative map drafted by democracy and the Constitution—that of equality, and of political status irrespective of religion, caste, ethnicity, gender and class’, and thus to scuttle the transformative potentialities of the Indian Constitution to combat social oppression.

In ‘India’s Many Insurgencies: Kashmir’, Chandhoke writes of the concoction of factors responsible for the turbulent entrapment of the people, enmeshed in the violence begotten by terrorism and religious fundamentalism, the Pakistani state, Indian security forces and draconian laws such as the AFSPA. The missteps on the part of successive governments at the Centre in recognizing and according respect to the democratic aspirations of the people of Kashmir have led to a spiralling of violence in the State. Redressing the problems in Kashmir requires political imagination and will.

In ‘The Northeast: A Thousand Armed Rebellions’, Chandhoke highlights the deeply complex interweaving of specific histories of the States in the Northeast, and of their integration with India. She engages with specific issues of migration, imposition of AFSPA and other draconian laws, stationing of armed forces, secessionist demands that reject any attempts at negotiated settlements, demand for control over resources of the region, and the NRC, among a host of other issues. To perceive protest and rebellion as law-and-order problems is to depreciate the suffering engendered by inequity and marginalization. If the State perceives itself as the upholder of stability at any cost, its role as an upholder of justice may be eroded.

In ‘Maoist Violence’, Chandhoke asserts that the Maoist propagation of ‘revolutionary politics’ targeted not only the representatives and the symbols of the Indian state, but also innocent civilians. This violence was dehumanizing. It was an emulation of those very systems, institutions, and relations of oppression and exploitation that the Maoists seek to overthrow. Therefore, one may raise questions about the Maoist claim to represent the oppressed and the marginalized. The inability or unwillingness of emancipatory movements to control violence is self-defeating.

The underlying theme in the book is that if violence is the chief architect of history, it will only lead to the replacement of one sort of oppression by another. Chandhoke alludes to Fanon’s Wretched of the Earth that spoke of the debilitating effects of colonial violence that scar the psyche of the colonized. She asserts that Fanon’s recognition that it was hard to bottle back the counter violence unleashed against the colonizers’ violence has been papered over. Violence has continued even after the colonial rulers were replaced. Violence thus overpowers its own initiators in Frankensteinian forms.

Bringing Gandhi back with his emphasis on ahimsa and active nonviolence as the guide to our everyday lives may permit the exploration of alternate ways of resisting oppression. Too often, violence is justified as being more effective than nonviolent techniques because it aids in reaping greater benefits and faster. That argument is countered by the evidence of gains through participation in the democratic process, which far outweigh the gains through the use of violence. Gandhi’s reminder that patriotism mixed with violence could be an intoxicant and misguide the people seems to be still valid.

Politics is hard work. It requires investment of time and energy, courage, reasoning, persuasion, and dialogue. Through creative imagination, Indian citizens could incorporate ahimsa or active nonviolence into our everyday lives and so can the Indian state through laws and legislation. By appealing to reason, persuasion, and dialogue, we may overcome social discrimination and thus preserve our existence as a civilized democracy. As citizens of India, we must reclaim our agency for sculpting a political community that upholds justice both for ourselves and those who come after us. And as this book prods us, such a creative and imaginative project is a developing story, a continuous struggle to keep violence at bay in Indian society.