Manto in Toto: Rejigging the Jigsaw 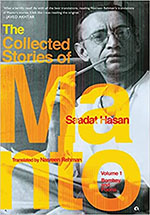 On the very first page of this book, the translator anticipates and answers, or at least deflects, a question many askance readers may have in mind. ‘Those irked by yet another translation of Manto’s stories,’ says Nasreen Rehman, ‘should blame David Davidar, who suggested that I undertake this venture’ (p. ix).

It turns out that Rehman had approached Davidar, the founder of the publishing company Aleph, with a modest proposal to publish a selection of fifteen stories by Manto about film life that she had translated, as a by-product of her PhD thesis titled, ‘A History of the Cinema in Lahore 1917-1947’. But if there is a publisher in India who readily deals in quantity and goes for doorstoppers, it is dear David. Further, if half a dozen publishers in India, Pakistan and Britain were already raking it in by publishing Manto in English, there was no reason why he should be left out, especially when he was ready to do it bigger if not better.

This is only the first volume of the three that Davidar and Rehman have planned which will eventually contain all the short stories of Manto which apparently number 255. This is a surprisingly large number; Premchand wrote just over 300 in a career that was a decade longer. But a friend of Manto’s who was constantly with him in his last year once said that in that one year alone (1954), Manto wrote about 100 stories—at the rate roughly of one story per bottle, for he was by then a confirmed alcoholic, in deep penury, and obliged to push his pen constantly for his bread and wine (Mohammad Asadullah, cited in Saadat Hasan Manto: Dastavez (in Hindi), 1993, II: 321).