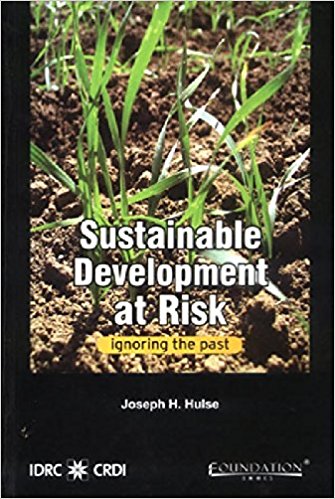 The author of this book is a highly respected figure, who, as the blurb tells us, has enjoyed a long and distinguished career in academia and in the field of international development. Given the vast knowledge and wide-ranging experience that have gone into the making of the book, the manifest goodwill of the author, and his evident concern about the future of humanity, it seems graceless for the reviewer to go beyond complimentary remarks and ask hard questions. Nevertheless that disagreeable necessity cannot be avoided. The book is indeed a well-meaning one. It brings together many different elements: capsule histories of several technologies, and of international aid agencies and their programmes; concern at the unsustainable direction that the development process has taken, and at the unwillingness of opulent western countries (in particular the USA) to accept changes in the interest of sustainability and equity; and a scattering of unexceptionable sentiments, high-minded exhortations and ironic comments.

However, one wishes that the book had been more tightly structured, with “its prolixities docked” (to borrow a phrase from Fowler), and propelled by a forceful central thesis on what needs to be done to pull humanity back from the brink of disaster. Unfortunately, while the book tells us a great deal, much of it interesting and useful, it lacks rigour and a strict sense of relevance to the main theme. In the Introduction the author says that “much of relevance is perforce omitted”. One feels tempted to add that much of irrelevance is needlessly included. As for where the book leads us, one is not at all clear.

A few words in justification of that harsh comment about relevance seem necessary. ‘Technology’ is not new. It has been with us always. However, it was only in relatively recent times that human beings acquired the capacity to make unsustainable drafts on nature, inflict grave damage by way of pollution and contamination on it, and partially destroy their own habitat. If this is what our (and the author’s) central concern is about, then we (and he) must surely focus on the rapidly accelerating pace of technological development in recent times, the economic theory that supports this, the dangers that the combination hold, and the possibility (if any) of stopping and reversing the process. That focus is missing in the book.

For instance, it traces the historical evolution of technology in diverse fields, such as agriculture, industry, textiles, food-processing, medicine, printing, and so on, from the earliest times (going back some 5000 or 6000 years) to the present. The author seems to suffer from a pedagogic weakness that no doubt arises from his immense store of knowledge and his desire to share it. As soon as he makes a reference to any technology, whether it is weaving or milling or food-processing or writing/printing or anything else, he is unable to resist the temptation of launching into (a) an explanation of the technicalities involved, and (b) an account of its history from ancient times. Doubtless we learn a great deal from the author’s numerous expositions, but we are distracted from what is presumably the main theme. (To mention a few examples, we are happy to be educated on early hominid diets, ohmic heating, high isostatic pressures, pulsed energy, and the evolution of printing and telecommunications; but how necessary were these lessons from the point of view of the central theme of the book? Incidentally, the author’s historical narration on health and medicine makes no reference to Ayurveda.)

The historical approach implicitly assumes an unbroken continuity, whereas the important fact is discontinuity: for thousands of years, technology grew slowly, was small-scale, and had no major impact on nature, but that changed dramatically not very long ago. That sharp divide between the past and the present must be kept in mind. One is sure that the author is well aware of this, but that awareness does not come through clearly in the book. Consider the sub-title ‘Ignoring the Past’. As a general proposition, one can readily agree that the past should not be ignored but learnt from. However, if the autonomous, galloping and cancerous growth of technology is a recent phenomenon, will a study of the distant past, however interesting in itself, be of much help in dealing with this new disease?

Apart from getting lost in the exposition of technologies and their evolution, the book tends to lose its way also in detailed accounts of international organizations and institutions, such as the United Nations, the Atlantic Charter, the Consultative Group on International Agricultural Research (CGIAR), IDRC, FAO, and so on. (There is even an extensive and quite unnecessary history of CGIAR.) All this makes interesting reading, but should perhaps have been in a different book. Incidentally, if all this institutional development had contributed a great deal of wisdom, would humanity be in such dire straits today? Would it not be right to say that the UN agencies, the World Bank, and so on, have actively promoted or at least participated in ideas that have led humanity to the brink of disaster?

The author has for long been a part of the international aid establishment, and that perspective is the governing one in the book. The case histories of successful projects that he provides are all those involving the initiatives or activities of international aid agencies. One has no desire to belittle those initiatives or to deny the good that they did. However, all this pales into insignificance besides the grim future that looms before humanity today. It seems to this reviewer that the author is insufficiently detached from his life-long involvement in the aid system. Similarly, his very scholarship and his close involvement in technological studies and research make it difficult for him to detach himself from modern technology and question it in fundamental ways.

So far we have been talking about what the book says. Let us now consider what the book does not say. Given the stated theme of the book, one would have expected a discussion of some of the worst disasters brought about by the pursuit of ‘development’ in the prevailing sense, with a view to understanding what kind of change in thinking is needed. Surprisingly, there is no reference to one of the greatest environmental disasters in human history, namely, the near-death of the Aral Sea. Other well-known disasters that have an archetypal significance, such as Bhopal and Exxon Valdes, are also not mentioned. Chernobyl is briefly mentioned in passing, with no discussion of its implications. In the author’s own words, is this not a case of ‘ignoring the past’?

The book does not discuss that bizarre story which casts a lurid light on what we call civilization, namely, the Mad Cow disease and the related slaughter of millions of animals. It talks about the pharmaceutical industry, but is silent on the unimaginable pain and cruelty that the growth of that industry (and the cosmetics industry) has meant for countless animals and birds. It refers to ethics but there is no discussion of the implicit assumption of the subservience of other species to human needs and the perceived dispensability of those species. The horrors of ‘factory farming’ of animals and birds are not gone into. The book repeatedly talks about development but fails to take note of the immense distress that ‘developmental’ projects and programmes of various kinds have inflicted on large numbers of human beings, and in particular on the poor and the disadvantaged and on tribal communities, by way of involuntary displacement, loss of livelihoods, and so on. The author quotes Gandhi from time to time but is very far removed from the kind of fundamental questioning that Gandhi brought to bear on most subjects.

Concern about lifestyles based on heavy consumption and the inequities of the international system, expressed in scattered remarks here and there and repeated in the Epilogue, shows the author’s sensitivity, but the Epilogue is open to the criticism of ‘too little and too late’. It is the Epilogue, duly expanded and elaborated, that ought to have been the book, eliminating much that is there in the earlier pages.

In brief, the book falls short of a penetrating and fundamental criticism of the mainstream notion of ‘development’. There is no recognition of the fact that ‘sustainable development’ is an oxymoron if the term ‘development’ is understood in the prevailing sense. When Mahboob ul Haq first said that growth was not enough, it was a landmark statement indicative of a major shift in thinking. We now need another major shift and one more landmark statement, perhaps to the effect that growth is not only not enough but is even questionable; that it is a fatal delusion; that its pursuit is a spell from which we must free ourselves; and that our goal should be sanity, stability, balance and harmony. One does not expect the author (or many readers) to agree with that maverick statement, but one wishes that the book had shown some awareness of these complexities.

To end this review on a lighter note, the following nuggets are offered for the reader’s delectation. In one of the chapters there is a dramatic heading: “What is the Purpose of Human Existence?” Alas, no answer is provided to that grave question. A few lines later, there is the following sentence: “Marx was possessed of an indolent and unsystematic intellect”. One has seen many criticisms of Marx, but this one seemed novel.

Ramaswamy R. Iyer is with the Centre for Policy Research, New Delhi.