Love, Hope and Other Forms of Political Dissent 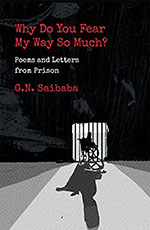 Having perused GN Saibaba’s recent collection, Why Do You Fear My Way So Much?: Poems and Letters from Prison over the last few days, I’m filled with grief and sadness. The UAPA (Unlawful Activities [Prevention] Act), under which GN Saibaba has been arrested, is a draconian colonial law, and will hopefully be revoked in the years to come, but one cannot overlook the damage it has caused in present times. I am thinking of fellow dissenting voices, scholars (Anand Teltumbde, Umar Khalid), Professors (Shoma Sen, Hany Babu), poet (Varavara Rao), and human rights activists (among others, Rona Wilson, Gautam Navlakha, Sudha Bharadwaj, deceased Stan Swamy), who have been incarcerated. We cannot write about one without thinking of others imprisoned under similar charges. Since UAPA doesn’t allow easy bail, humiliation and lengthy court proceedings become punishments. Saibaba’s bail rejection on medical grounds is structural violence, and has been condemned even by the UN (pp. 211-212). India is a welfare state, the world’s largest democracy, but since our country was born amidst bloodshed and violence, the many contemporary cases of injustice, caste violence, police brutality, and wrongful incarceration are hardly ever seen as an aberration.

GN Saibaba, ‘Professor of the People’, taught at University of Delhi until his sudden arrest in May 2014 due to alleged Maoist links. His service at Ram Lal Anand College was terminated in April 2021. Despite being paralysed by polio since the age of five, and while suffering 90 percent disability, Saibaba topped his university and went on to earn a PhD. As an activist, he advocated for the rights of the tribal, and those afflicted by poverty and state-sponsored violence. He campaigned widely against Operation Green Hunt, a paramilitary offensive in Central India to evict Adivasis from their habitat. UAPA has criminalized this act of solidarity. While in custody, Saibaba translated Kenyan author, Ngũgĩ wa Thiong’o, in Telegu; the book, Yuddha Kalamlo Swapnalu-Balya Gnapakaalu was launched in 2016. Saibaba’s health deteriorated post-incarceration. He contracted COVID, has acute pancreatitis, fatal heart condition, and a brain cyst. Denied a wheelchair, and with prison guards pulling Saibaba around, nerves of his left hand suffered severe damages (p. 25, pp. 207-208).