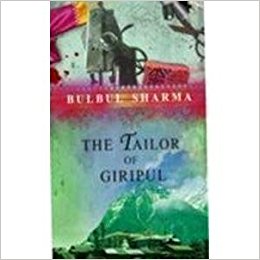 Bulbul Sharma’s latest novel, The Tailor of Giripul is the perfect book to curl up with on a rainy monsoon evening. It is redolent of the sounds and smells of the mountains, which the author evidently loves, and of the minutae of life lived in the small forgotten little villages nestled in the heart of those mountains. The narrative captures the attention of the reader from the very first page drawing him or her into the gentle, somnolent world of Giripul, a village situated, as its name indicates, near the bridge across the river Giri in Himachal. The pace of life in Giripul is slow and the only quotidian excitement is provided by the thrice daily arrival of the local bus from Shimla. This event never fails to galvanize the village and its inhabitants into action. At the appearance of the bus ‘people would run about for no reason, and a hidden radio would blare out film songs. Dogs would bark endlessly and old men would come out of nowhere to cross the road. When the bus left, its musical horn honking out a loud farewell, Giripul would slink back into slumber.’

Yet despite its apparently unexciting pace of life Giripul is peopled by an interesting set of individuals whom the author brings alive with gentle brushstrokes. There is Balu, the village beggar who decides to give up all his material possessions after he loses his wife and home, Shankar, the fisherman who loses a haggling contest with the Lala everyday, the Lala who owns the only tea shop which also serves as a communal meeting point for the villagers, the Bengali Baba who is adept at chasing away shadows and the handsome headman who has three wives and a Chinese mistress! There are also numerous characters from the past who slip in and out of the consciousness of the living, like Janak’s missing father and Leela or Bibiji’s, beloved Robert.