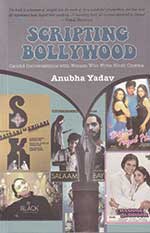 In a country like ours, where actors, read heroes and heroines, take centre stage over everything else in popular Hindustani cinema, are more important than even the directors, one wonders how important scripts are, and hence scriptwriters.  To begin with a confession, I thought more about it once this book hit the market.

The Indian screenwriter Anjum Rajabali (known for scripting Drohkaal, Ghulam, Rajneeti and Arakshan to name a few) has penned the Foreword to this book where he starts by quoting Alfred Hitchcock: ‘To make a great film, you need three things—the script, the script and the script.’  These opening lines of the book, set not only the intention but also tone in place. Rajabali goes on to quote Sydney Pollack, to reinforce the importance of a script: ‘There’s no question that a great script is essential, maybe the essential thing for a movie to succeed.’  To add to the zing, Scripting Bollywood: Candid Conversations with Women Who Write Hindi Cinema isn’t just a book on scriptwriters. It is on women scriptwriters.

The book talks about the interesting and impressionable women screenwriters and their works; dips into their style of writing, the method they adopt, their interviews to further understand their craft.

After the introduction, the author delves into ‘The Pioneers’—Fatima Begum, Ruby Meyers, Esther Victoria Abraham, Jaddan Bai, Ratan Bai Begg, Protima Dasgupta, Devika Rani, Leela Chitnis, Zubeida Begum and Ismat Chugtai. Yadav points out how these women multi-tasked and went ahead donning many hats in the Bombay film history. However, although they were recognized by their other roles, their identity as screenwriters was always shadowed. Again, if one notices the years when these dynamic women were working, one sees the span from the silent era onwards, in other words, right from the very beginning of cinema in India. This chapter turns more important as it critically looks at The Encyclopedia of Indian Cinema (Rajadhyaksha and Willemen) and criticizes it for undermining the importance of women screenwriters! As a reviewer, I was rather glad to find a critical evaluation of the said Encyclopaedia as it has always irked me that my favourite actor, Sanjeev Kumar, did not get his share of credit in it.

These names might not ring a bell with everyone but they seem to be rather familiar and fond of the films written by them. In-depth interviews with these dynamic women reveal not only their style of working, their process of creativity but also their inspirations. Most of them point out how they imbibe and pick up from real life people that they come across. The screenwriters also talk about the difficulties and issues they come across too—concerns finding the right editor, looking for a producer, along with dealing with critics.

The detailed filmography at the end of each chapter is an added charm. But what really pull one into the book are the different anecdotes related by these dynamic writers—their encounters with filmmakers and the process of how the film actually came about. For instance, one is intrigued to read what transpired when Kamna Chandra met up with Raj Kapoor and Prem Rog came about or her meeting Yash Chopra and the making of Chandni! In all, we have these women screenwriters talk about anything and everything related to their craft. If there is one who calls the first draft of writing a ‘vomit draft’, there is another who claims that she has always been a ‘wallpaper, quietly observing people and relationships’. A quick and easy read, Scripting Bollywood is a must for all those who want to know what happens behind scenes of filmmaking.

My only apprehension for this book lies in its title and the use of the words, ‘Bollywood’ and ‘Hindi Cinema’, and more so, together. Yes—Bollywood is the term used popularly, used by the commoners as well as academicians, but it has always perturbed me. No way, our industry is a rip off from the one in Hollywood and we also know how the terminology came about. Like the language that our film industry in Mumbai delves in, it would have been better if academicians as well as journalists indulge in the label, Hindustani Cinema.