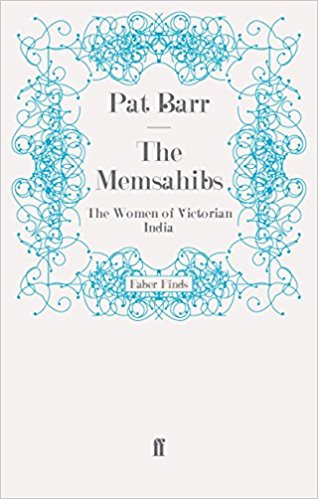 Kipling’s caricature of the hill-station memsahib is the one that has endured—­frivolous, vain, sometimes adulterous, ‘a heartless bitch with an ever tinkling laugh’.

Pat Barr has attempted to correct this image by describing the lives of a few women who came to India before the 1857 ‘mutiny’ and who were equal to their men-folk in courage, resolution and dogged devotion to duty. She presents sketches of women from a wide spectrum ranging from Governor-General Auck­land’s gifted spinster sisters to the name­less widows of the soldiers who died at Jalalabad or Cawnpore.

For Emily Eden, Auckland’s sister, the eight-month imperial Cavalcade from Calcutta to Ferozepore and Simla was one boring trip though she describes the scenes vividly. At Benares where they pitched tents—’a prodigal quantity of canvas with each having a private tent with bed, dressing and drawing room connected by canvas passages’—she found it ‘open-airish and unsafe’. ‘I have never seen such squalid, melancholy discomfort’.

At Cawnpore there was a famine rag­ing and the ‘skeletons at feasts were closer than usual and the women’s skulls looked dreadful’, Emily writes wryly. Finally at Ferozepore, where Auckland is to seal his friendship with Ranjit Singh, Emily presented a bonnet to give the ‘Lion of Punjab’ some slight idea of what’s what in bonnets.[ih`c-hide-content ihc_mb_type=”block” ihc_mb_who=”unreg” ihc_mb_template=”1″ ]

Into Emily’s tent peeps a character whose arch-type one can come across even now. For Fanny Parkes travelling about the country is very amusing. ‘How much there is to delight the eye in this bright, beautiful world! Roaming about with a good tent and a good Arab one might be happy forever in India…. I have a pencil instead of a gun and believe it affords me satisfaction equal, if not greater than the sportsman derives from his Manton.’

But not all memsahibs were as euph­oric, or fortunate. With the Afghanistan expedition proving a disaster, there is the account of Florentina Sale, wife of the commander of the First Bengal Brigade, who lived through the Jalalabad massacre. Standing on her roof-top, keeping behind the chimneys to escape the bullets, she had observed the skirmishes the British invariably lost. When one nearby fort was captured by the Afghans she noted that ‘a child with a stick might have repulsed them. During the retreat she nursed her mortally wounded son-in-law and had ‘the sorrowful satisfaction of giving Stuart a Christian burial. Of the condition of the white women handed over to Akbar Khan’s protection, ‘well, that was their only chance of survival’. They had passed the route ‘covered with awfully mangled bodies all naked; fifty­-eight English were counted in the Tun­ghee Gorge and natives innumerable’. Akbar Khan, of course, sent them candies—though not saying that the top­-ranking mems should have the first pick. But they did.

For the widows of those officers who fell at Jalalabad, all they could do was send appeals ‘to have their bereavement eased with sufficient funds to return to England’. The ordinary soldiers’ widows did not have even this hope—their best hope was to find another husband, with some becoming engaged three or four deep.

Life in the ‘Lines’ was different: rows of brick and plaster barracks, the quar­ters overcrowded, officers and travellers glimpsed these memsahibs doing their ten-year stint jolting along in bullock-­carts from barracks and keening over their dying children. Mortality rate was indeed very high and a doctor, Jefferson says: ‘It is a protracted liquidation of our English stock’. Most of the girls were married off in their teens and there is mention of a girl who was always play­ing marbles with the boys when her soldier-husband retuned from work.

Travelling long distances before the railways was often called ‘going Dak’. This is how Honoria Lawrence describes it: ‘Every ten miles or so there is a chowkie where fresh relays of bearers are found… Then you see that your palki is well provided for the road. In the flat tin box on the roof—change of clothes, a tiny box of tea, a cannister of sugar and of sago, a loaf of bread, a cold fowl, two bottles of beer, a corkscrew and a metal cap, a candle-stick and wax candles. Have your medicine chest inside; Oh! and don’t forget to tie on the pole outside a small tin kettle, your chillumchi (brass basin) and water pot. Add this little mora (bamboo stool) useful to sit on when cooking breakfast. And have you written to the civilian of each district to give you a mounted guard?’

Thus did the memsahib journey, mostly by night, with the bearers chat­ting quietly. Never did she feel a moment’s unease. Explains she: ‘An unprotected woman can travel safely thus from one end of India to the other’.

Pat Barr has fairly succeeded in drawing a sympathetic portrait of these early women who set out for an unknown land and who stuck it out. The narrative is often jerky and no single person emerges clearly, no single lingering figure. Yet when one puts down the book it is with a feeling of melancholy and a faint admir­ation for the moms of the latter-day memsahibs.