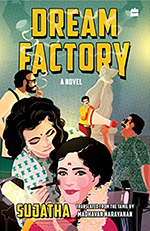 S Rangarajan, who wrote under the allonym ‘Sujatha’, was the quintessential Renaissance man—an engineer with the public sector Bharat Electronics Limited and a key member of the team that invented the electronic voting machine; he was a literary phenomenon in Tamil, writing across genres from popular science, science fiction to thrillers, and romances, stage plays, essays and weekly columns in magazines. His output includes over 100 novels, 250 short stories, 10 plays, books on science in addition to his columns in magazines apart from screen plays for several movie adaptations of his books.

Kanavu Thozhirsalai (Dream Factory) in Tamil was first serialized in the popular Tamil weekly Ananda Vikatan in the late 70s, offering readers an unvarnished close up of the world of Tamil cinema—casual cruelty, sleaze and venality underlying the cult of the super hero and forever sixteen heroines. When Sujatha wrote the novel some of his stories had already been made into movies in Tamil but the experience was far from pleasant for the writer. As he says in a discussion with actor Lakshmi and director Mahendran, when asked if he was happy with the outcome, he replied: ‘No. Not at all. That’s why I started writing this novel…I had no involvement in the making of the film (Priya—a 1978 blockbuster with Rajnikanth and Sridevi). They didn’t even show me the script or tell me anything about the treatment.’

Sujatha however, goes on to concede that the directors and producers know their audiences better, ruefully admitting that: ‘In my story, the heroine disappears halfway through the story. But what kind of film is made without a heroine?’

‘Sujatha’s discomfort with movie adaptations notwithstanding, the book reads like a fast-paced screenplay, almost Dan Brownish in its jump-cuts and multiple story threads that the author deftly carries through. Arun Vijay, the protagonist, is a super star and the novel begins with his secretary, the redoubtable Bhaskar, turning down shooting schedules for the next two years! Sujatha unveils a recognizable cast of characters—the ubiquitous producers who want the superstar for their movies at any cost, an ageing, petulant heroine, a young rebel director—who might seem stereotypical. But the self-reflexive writing verges on metafiction as the author weaves in film journalists, directors and actors who were very much a part of the cine world when the book was serialized.