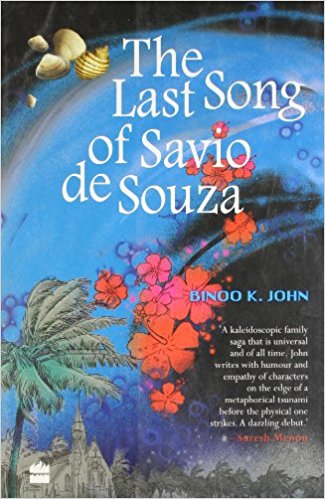 It has been a while since we have seen a story about Kerala, written in English and replete with its local flavour and fervour.As a result Binoo K. John’s new book catches one’s eye.  Known for his three previous books, all non-fiction: two travelogues about Malabar and Cherrapunji and one on the English language in India, a ‘quasi-academic book’ as he calls it, John’s versatility as a writer is put to the test this time around.

In his latest offering, The Last Song of Savio de Souza, he debuts as a novelist after confessing to two aborted attempts at writing fiction in the interviews that followed its publication. The shift from nonfiction to fiction is undoubtedly difficult. It requires one to master a different set of skills and the effort can show. Is John able to tell Savio de Souza’s story well is the question we must ask.

The story is engaging enough, set as it is in a place called Puram, clearly a shortened version of Thiruvanthapuram. Forming its core are two intertwining thematic tracks of a family saga of poverty and sacrifice and the portrayal of the larger social reality of their world where unknown to them and others like them, religion has become an industry, manipulated and managed by vested interests.  The family story of the de Souzas takes centre- stage against this backdrop of a social reality in the state of Kerala.