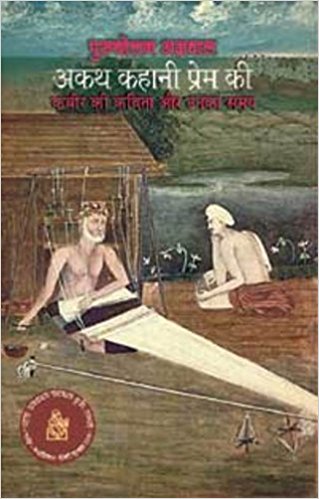 Kabir is now widely acclaimed as one of our most eminent poets from any Indian language, but this wasn’t always so. Until about half a century ago, he was regarded in Hindi as perhaps the last of the quartet of the four great bhakti poets and ranked after Tulsi Das, Sur Das and Mira Bai. In a marked reversal, Kabir’s reputation has risen meteorically, followed by Mira’s, while Tulsi and Sur have struggled to hold their own. Clearly, a major contributing factor behind this development is that rather as Mira has been adopted by feminists, Kabir is now seen as the flag-bearer of our threatened ‘secularism’—despite the fact that rather than having equal respect for Hinduism and Islam, the two religions he knew about, he had equal and indeed unfathomable contempt for both, and himself worshipped a Nirguna or formless God whom he nevertheless (and problematically) called ‘Ram.’ Beyond say a dozen couplets and half a dozen padas, which is all even many admirers know of him, his poetry is often allegorical, mystical or paradoxical—even to the point of being daunting.

The place of Kabir in the Hindi canon has been the subject of much debate and contestation. After the traditional view of Kabir as the unruly fourth of the Bhakti quartet was reinforced by Ramachandra Shukla in his magisterial History of Hindi Literature (1929), Hazari Prasad Dwivedi, also of Banaras, Kabir’s own city, set out in the 1940s to rescue Kabir by emphasizing mainly his free, original and unconventional spirit and by providing a rich contextualization of the social practices and religious sects of his times—which were shortly to be supplemented by a new sect, the Kabir-Panth! Dwivedi’s arch-disciple Namvar Singh recounts delightfully self-deprecatory tales of how he, as a fervent young Marxist, wanted his guru to go one step further and acclaim Kabir as a radical rebel, whereupon the guru just serenely smiled at the ‘angularities’ of his disciple and made a supremely witty rejoinder or two. In the last few years, the pro-Dalit ideologue Dharmavir has roundly denounced Shukla and Dwivedi alike for setting up a ‘Brahmin Kabir,’ while his own counter-version of Kabir has come to be characterized as a ‘Dalit Kabir.’