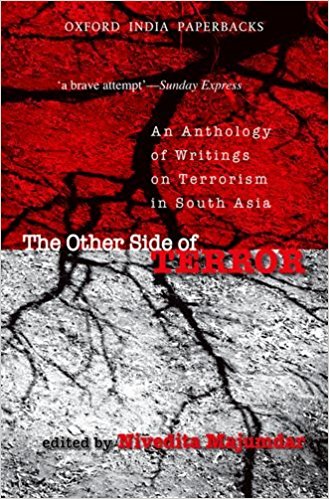 Juxtaposing Pieces
Shobhana Bhattacharji
THE OTHER SIDE OF TERROR: AN ANTHOLOGY OF WRITINGS ON TERRORISM by Nivedita Majumdar Oxford University Press, 2009, 324 pp., 695
July 2017, volume 33, No 7

The poems, short stories, extracts from magazines, statements in courts, and novels in The Other Side of Terror (‘What does it mean?’ an exasperated reader asked about the title) are grouped under ‘Freedom and Terror’, ‘Revolution and Terror’, and ‘Identity and Terror’. They include Bankim’s Anand Math, Bhagat Singh’s deposition in court, a thoughtful interior monologue from Sri Lanka’s Jean Arasanayagam, an essay by Pankaj Mishra and a story by Samrat Upadhaya (but not Manjushree Thapa) on Nepal, Kartar Singh Duggal and Khushwant Singh on Punjab, Mitra Phukan and Mamang Dai on the North-East of India (referred to as merely ‘the North-East’), an analysis of contemporary Manipuri poetry in the time of terror by Robin Ngangom, poems by Robin Ngangom and Kynpham Sing Nongkynrih; Neerja Mattoo on women during Kashmir’s militancy, Sheba Chhachhi’s excellent black and white photographs of women from the Kashmir valley; Mahasweta Devi, Tagore, Aurobindo Ghosh and others from but not necessarily on Bengal.

An anthology can produce unexpected knowledge by merely juxtaposing pieces. Tagore’s Four Chapters, for instance, has less immediate energy than Bhagat Singh’s deposition or Tilak’s newspaper article. Constrained by the formal requirements of the novel, Tagore uses conversation to propound political views, but the result is as stilted as early nineteenth century British closet drama which was often political tracts disguised as plays. What I particularly liked in this book is the many perceptions of terrorism. For instance, both Aurobindo Ghosh and Bhagat Singh see murder or a bomb as sporadic responses to state repression. But terrorism is a disease, says Ghosh, who hopes for ‘normal’ politics which will become possible under ‘normal conditions’, that is, ‘peaceful opposition and progress within the law’. In Ghosh’s view, terrorism unsettles judgement; it is not supported by the mass; it is a minority occurrence yet it polarises society and silences moderates; and although the growing strength of terrorism is ‘not difficult to explain; it is extremely difficult to combat’ (pp. 12–17). A terrorist talking about his work, Bhagat Singh is by far the clearest about terrorism among the pre-1947 writers in the anthology: