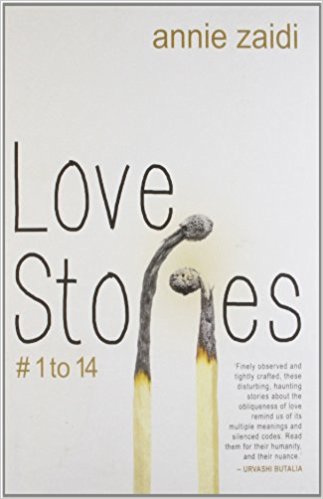 Love Stories # 1-14 is not arranged in the numerical order one expects to find on turning the first page—this is the book’s first surprise. And it is this note of whimsy that connects the threads of Annie Zaidi’s fourteen love stories in the collection under review.

Zaidi’s short stories trace the career of love, across lives that range from the young to the young at heart. Let me pick on a few, randomly, though in a rather non-whimsical order. ‘Love Story # 1’ or ‘The one that ended’ muses on a middle-class heterosexual couple’s world whose seams are coming apart at the news of a ‘stitch’—a medical rarity that occurs in one out of ten thousand cases. She tries to keep the news of her disease and hold on to their tender intimacies even as he loses his job. His painstaking realization that it has always been she who began ‘it,’ that medical expenses will demand more attention to the minutiae of life, is set off by a shared, quirky desire to go off on a ‘shameless’ picnic. Their disquietingly intense smiles for each other, on what is a startling jaunt after all, make it excruciatingly intolerable for passers-by to look upon them. The story teases, even as it troubles, lightly, at our tried and tired notions of love.

Yet another one, ‘Love Story # 3’ or ‘The one that was fulfilled’ contemplates on the perils of monotony. It is a marriage where the couple seem to have everything going for them. But when one partner nudges at the hollowness underneath, the other tries frantically to hold on until both are forced to confront the concessions and compromises of a formulaic relationship. The searing pain of their perspectives on what each gained from the other—who supported/stopped whom—results, in the ensuing separation, in the wife who wanted ‘a happy married life’ getting a physical structure, the house. The successful artist husband who has been faithful throughout acquires a ‘tangible’ relationship with a younger, struggling artist. Does the prose skilfully weave in a faint thread of dry mockery at this new relationship, where he learns to stop breathing in order to hear the sound of his own breathing, where he doesn’t have to talk to the new woman at all and yet they hug every time they meet even after a few hours of being apart? Zaidi’s skill lies in drawing the reader into this tale of a man aching to be honest, whilst skimming across the sub-text of the costs paid for this honesty by those who perhaps could not be ingenious thus.

‘Love Story # 6’ or ‘The one that was foolish’ is about a woman and a man, friends who connect constantly, sharing drinks, meals, movies but are reluctant to disturb the ‘neat’ order and familiarity of friendship by trying to extend it to something more. So, they marry different people and yet find that their lives don’t quite make sense. They re-connect, and slip back into a comfortable friendship. Niggling questions tug at the fringes of this renewed friendship, even as they are at ease with each other, able to voice small dissatisfactions and share tiny disappointments in their spouses. The story prods at notions of friendship and marriage—why can’t we have friends, good friends, of the opposite sex even when married? Or, can a man and woman remain friends after they get married and see each other, perhaps, much too up-close?

Not all the love stories are about the young, or the middle-aged, or even people who know each other. ‘Love Story # 10’ or ‘The one that was announced’ explores the world of a fifty-seven going on fifty-eight single woman who takes a local train to work every day. The voice of the announcer, a voice ‘utterly unsuited to the making of public announcements’ but a rather ‘special’ voice, is the one around which she has built a ‘special bond’. Her impending retirement triggers off a crisis—how could she continue to ‘meet’ this voice? The story is about the turmoil caused by an older woman’s desire to simply hear a voice which has sustained her, day after day, for nearly a dozen years. Zaidi juxtaposes the intensity of loneliness against the desperation to connect, compounded by the small yet significant (to those afflicted by them, at least) indignities of old age in prose that tugs at our consciousness, quietly yet insistently.

‘Love Story # 14’ or ‘The one that stepped off a broken-down bus’ is about a young woman on the verge of an arranged marriage and a recently divorced young man who meet on a bus from the city (Delhi) to the hills (in Uttaranchal) that has a breakdown. They get to talking after she steals his shoes, and they converse, desultorily, about their lives and loves, dreams and desires. The strength of this rather long short story lies in its seeming aimlessness, a chance meeting and the reflective ambience of the conversation that allows two strangers to discover and describe each other. It probably is my favourite, because it concludes so tantalizingly. Any other ‘ending,’ after all, could hardly have done justice to a love story narrated in such enchantingly indulgent tones.

Journalist, author and playwright, Annie Zaidi already has a book of poems and a book of essays to her credit, apart from co-authoring a collection of short stories. She also writes for numerous websites, apart from her own blog. This is her third book—carefully crafted, it leaves the reader wanting more. Perhaps it is the underlying tone of rueful resignation apropos love (dare I say, life?). Perchance it is the opposed tones of the narratives—simultaneously searching, sad and celebratory. Life’s ripples are not disturbed in these stories by notes of exuberance, or even a sense of strife or struggle on a larger-than-life canvas. Yet, its quiet tones hint at the ordinarily heroic manner in which middle-class urban lives, walking about, doing nothing, possibly sick of being human, traverse the many roads to reach for love. My only quarrel would, perhaps, be with its price: it returns one resoundingly to earth!

Asma Rasheed is with the EFL University, Hyderabad.