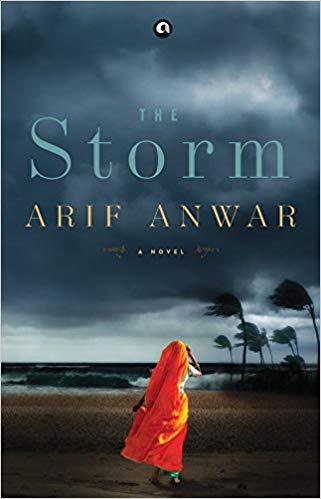 ‘The interior is ten paces on each side. At the far end, dimly lit by the hole-ridden roof, is a fiercely beautiful woman. Tall, with midnight skin, she wears a garland of severed heads, a skirt of limbs. Her rolling tongue reaches beyond her chin to point to the vanquished demon she tramples underfoot.

Honufa kneels before Kali–the Black One. The One Beyond Time. The One Who Destroys.

She places before the dark goddess the offering of flowers she has brought, she prays to her, ignoring the voice inside that reminds her that new God is a jealous one, that this act is “shirk”, one of the most unforgivable that a Muslim can commit—that of placing another on equal status with God Most High. But as a child burning with fever seeks her mother, Honufa cannot help herself.’

Arif Anwar’s debut novel, The Storm, is a work of poetic prose. There are some who believe that the genre of poetry and prose are completely different and should not be clubbed, but there are many who differ. The lines quoted above are just a tiny example of the lyrical quality of the book.

History, with some bits of religion and economics, is woven into the fabric of the plot in a manner that at times gives the impression of intertextuality within the different stories. There are diverse stories about diverse people, from diverse backgrounds and continents, at different points of time (all being landmark years in history) which, by the end of the novel, ultimately fit with each other, like a jigsaw puzzle. The historical events that have influenced the characters of this novel are World War II, the Partition of India in 1947, the cyclonic storm in East Pakistan in 1970, the Bangladesh War of Liberation in 1971 and the 9/11 attack on the Twin Towers. This spreads the expanse of the novel over decades, blending and merging borders and boundaries. At the outset, it may seem that the spectrum of the novel is too wide—cutting across decades and continents, but in actuality, it doesn’t seem so because of the manner in which Anwar has tied up the characters and their lives with a single strand. If the author is being commended on his craftsmanship and the characterization, it also makes the novel a not-so-easy read as one has to go back and forth, to pick up earlier threads. The symbols, used as minute references at a certain point in the novel, later turn out to be of significance as the story enfolds. Still, it cannot be denied that keeping pace with the storyline, as it is perpetually traversing time, can leave one dizzy.