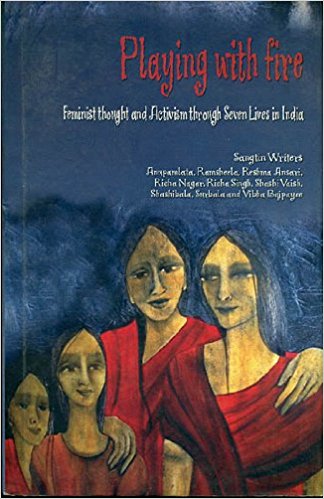 The core of Playing with Fire is formed by the English version of the Hindustani Sangtin Yatra (2004), a moving and powerful reflection by seven women, village-level workers and activists, on their fraught lives and work in Sitapur district, in the Awadh region of Uttar Pradesh. In 1998, Richa Singh who worked at the district level and the seven women (co-authors of this book) set up Sangtin as an NGO independent of the government-sponsored organization with which all of them were associated. Together with Richa Nagar, a geographer at the University of Minnesota’s Gender Studies department, they began to put together a collective socio-biography that would speak from the women’s own locations about poverty, empowerment and organizational interventions. Anupamlata, Ramsheela, Reshma Ansari, Shashi Vaish, Shashibala and Vibha Bajpayee, who are named on the cover, then use pseudonyms for themselves and for the larger organizaton Nari Samata Yojana (NSY) from which Sangtin grew.

Playing with Fire frames the collective journey of Sangtin Yatra with two additional chapters, an Introduction and a Postsctipt, both by Richa Nagar. The deeply honest, risky and innovative methodology of writing focused personal diaries and weaving the stories together for wider readership fore-grounds the complex politics of knowledge production. By engaging intellectually with questions of developmental and empowerment, the Sangtin writers’ dialogue creates a more grounded knowledge of the lives of the marginalized.