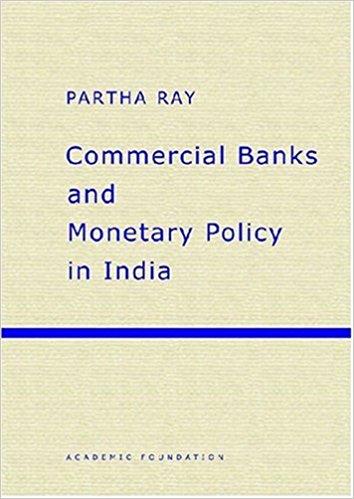 The present global economic crisis has generated considerable interest in the role of central banks in regulating the behaviour of commercial banks. Though the Indian story in this regard is seen in positive terms, we do not clearly know for certain as to what channels the monetary policy actions are transmitted to the real economy. The book under review looks into this issue within the broad framework of credit channel of monetary transmission. Though the book is fundamentally empirical in nature and describes the Indian experience of impact of monetary policy on commercial bank behaviour, it is preceded by a theoretical framework based on extended macroeconomic analysis that draws from the ‘new theory of monetary policy’ which brings in the credit channel in the transmission of monetary policy and a very succinct discussion of the trends in the Indian economy and the monetary policy developments. The domain of interest in the book is the post-reforms Indian economy i.e. 1991-92 through 2003-04.

The book is set out in seven chapters. A brief introduction that spells out the context, is followed by discussion of some basic theoretical considerations. The third chapter presents some stylized facts of monetary policy and commercial bank behaviour in India. The following three chapters contain empirical analysis of the impact of monetary policy on bank behaviour in general, in terms of ownership, and size, in that order. The last chapter, besides summarizing the findings, also reflects on the future scenario that points towards bigger and fewer players emerging in the banking sector.

There has been certain neglect of theoretical and empirical work on monetary policy in India because of the long prevalence of administered interest rates and other regulations during 1970s and 1980s. Under a controlled regime the issue of central banks’ policy actions and commercial banks’ portfolio behaviour will be less interesting. As the author points out, in a controlled regime much of the monetary policy actions are affected by administrative instructions. The presence of high cash reserve ratios (CRR) and statutory liquidity ratios (SLR) also provided little freedom for the commercial banks to make adjustments on the assets side of their balance sheet. Under these conditions, the only adjustment the banks could make on their asset side was to reduce their landing.