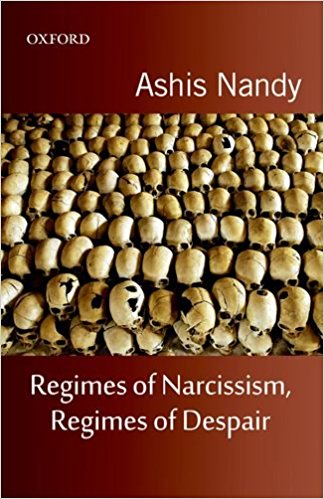 The back cover often plays an important role in the reader’s journey from picking up the book from a stack to making it to its last page. It’s so important that many a book and blog have been written for helping writers and publishers write the perfect back page, or ‘creating a killer back cover.’ Ashis Nandy’s Regimes of Narcissism, Regimes of Despair is an example of a back cover text that not only, like a well-cut movie trailer, sets the tone for the reader but one that stays until the end. Above the author’s portrait are printed his words in yellow: ‘these essays are about an India that is no longer the country on which I have written for something like four decades. (…).’ With only a few pages into the preface, it becomes amply clear that the book would be hundred times more enjoyable to those who are neither new to the history and evolution of Indian politics and society nor to Nandy’s astute reflections on the same. The subject, its treatment and the writing of this book—all bear the indelible mark of his genius, candour and clarity. Even if it is not the India that Nandy used to write about, what remains unchanged is that his writings continue to be an essential lens to comprehend the meaning of India’s various pasts and the madness of its schizophrenic present.