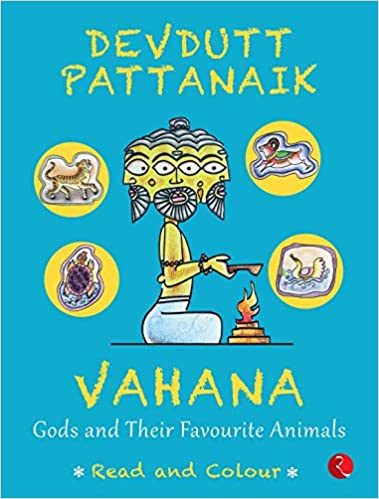 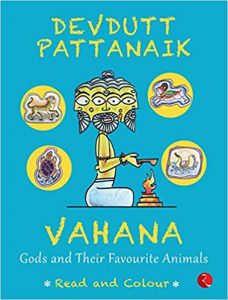 Still a child at 66, I was thrilled to get my hands on this beautiful book and sorely tempted to get the crayons on to it. Its large size made it easy to hold and the paper, including the flexible but tough cover material, most suitable for fingers, little or gnarled.

My mother, an art teacher in St. Xavier’s School, Burdwan, had in her very last year taken to such colouring books. Her eyesight was failing and her hands losing control, but the exercise of keeping her crayons within the outlines, and of matching one colour against another, kept her busy and happy, engrossed and  connected. I bought her several such books available on the market, including one named Divine Vahanas: See and Paint, Sri Ramakrishna Math, Chennai, first edition,1990.

So this book is not merely a children’s book and can have a wider, even therapeutic application.  I was also happy to find its print big enough and its language simple for all ages.

However, the text material—flowing like the unpolluted streams of ancient times—posed a few questions to me. ‘The gods needed animals to travel around the world and the animals needed the gods to learn how not to be hungry. This was an amazing idea, thanks to goddess Saraswati. This is how vahana came into being’ (blurb and pp. 1-18).

Is such a materialistic explanation of mutual convenience supported by the ancient texts? Were gods, as per the usual or age-old conception of them, entities who ‘had no way to travel except by walking’ (p. 1)? Were they all looking for conveyance and took the animals as ‘friends’ to help them along?

The lion, as stated in the Markandeya Purana, was sent to Durga (not Kali as mentioned on p. 39) by the other gods who had fashioned her to tackle Mahishasura. The elephant that Indra is associated with was churned out of the sea, again as the Bhagavata and Vishnu Purana say. The Brahma Purana has Garuda reproaching Vishnu for not appreciating his service enough. In reply Vishnu had pressed his weight upon Garuda and almost crushed him—showing him who was the boss. Such references suggest that the relationship between a god and his vahana was not one of parity that the word ‘friends’ connotes. The gods rode on the animals, even if they did not ride roughshod. They were patronizing to them, like they were to the human species. It was the relationship between the Bhakta and Bhagawan, as it is commonly called.

When we jokingly describe someone as someone else’s vahana, there is that nuance of being a ‘bearer’, attendant or servant. Had the book explained that the word ‘vahana’ is a Sanskrit word derived from the root ‘vah’ which means ‘to carry’ or ‘to bear’, it would automatically have conveyed the inequality in the relationship.