In the Shadow of Global Recession 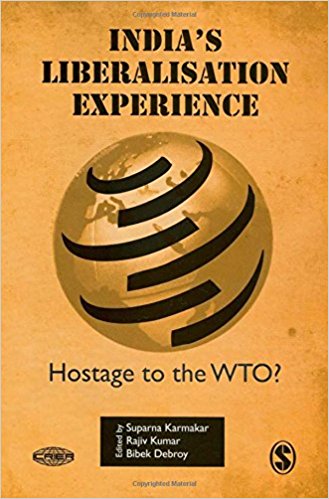 As Nobel laureates Paul Krugman and Joseph Stiglitz sounded the alarm at the annual meeting of the American Economic Association that the US economy could slip back to recession in 2010, the (so called) debate on ‘free trade vs. protectionism’ once again has come back to the forefront. Although the official communique of the G-8 summit endorses the successful completion of the Doha Round of negotiations for economic recovery from recession, there are hardly any followers on the ground. Quarterly reports of WTO that track member countries’ tariff increases, new non-tariff and anti-dumping measures, found that ‘significant slippage in containing protectionist measure’ has occurred since the beginning of 2009. The big member states have turned to subsidies—notably in the financial sector but also in the automobile industry—and have threatened foreign direct investment protectionism against other member states. In contrast, the Indian government and the Confederation of Indian Industries have repeatedly expressed their eagerness to conclude the Doha round of talks by 2010.

This contrast is quite perplexing: while developed countries have taken protectionist measures and introduced fiscal stimulus packages to save their economic core, Indian elites have shown their keen interest in embracing the WTO at any cost. Does it reflect India’s poor bargaining power in the WTO? Does it reveal the dependant nature of the Indian economy on the global capitalist system?

The key to these questions lies in understanding India’s liberalization process and its relation with the WTO. It is perhaps not a coincidence that India’s new economic policy and its accession to the WTO came about within a space of a few years. But the important question here is: to what extent can this regime shift be attributed to a change in economic logic within the domestic system? That is, whether the demand for liberalization and globalization came from the national bourgeoisies or was it dictated by global multinational corporations, who were searching for new markets, where they can invest their excess capital (at a supernormal profit) and dump their product? A second related and equally important question is: has India benefited from the WTO? Rather, this question should be reframed as, which sections of India have benefitted and who have lost out? Under the shadow of worldwide recession and revival of Keynesianism, India’s Liberalisation Experience: Hostage to the WTO? which seeks answers to these questions, could have been an interesting read.

This edited volume includes a bunch of papers, commissioned by ICRIER, funded by Sir Ratan Tata Trust, to deal with issues related to the influence of the WTO on India’s new economic policies. The articles aspire to cover different aspects of the WTO and economic liberalization, ranging from reforms in agriculture, manufacturing and service sectors to the impact of intellectual property rights, regional trade agreements and issues of environment and trade. Three introductory articles by the editors set out the agenda for this volume: (i) to refute the ‘popular perception, which fails to distinguish between unilateralism and multilateral commitments, blames the WTO for much of the liberalisationand unilateral initiatives’ (Bibek Debroy) and (ii) to show that economic reforms do not have ‘pro-urban and pro rich bias … major beneficiaries of true reforms will be unorganized labour, small farmers, efficient trade and industry and consumers’ (Rajiv Kumar). The remaining chapters argue, by examining experiences from various sectors that the logic of liberalization has been mostly autonomous, demanded from within and the commitments made under the WTO represents only a ‘post facto binding of positions already reached through unilateral policy reforms’. Such a conclusion, reached by coherent logical arguments, careful examination of fact and an in-depth analysis could have been extremely illuminating. Unfortunately this volume fails to deliver any of the above.

The primary problem is that this volume does not offer a theoretical framework to examine the above mentioned questions. For instance, take the first question: did economic reforms in India originate from domestic requirements of capitalist development? How can one distinguish such a course of development from WTO interventions? A clear theoretical framework, here, was absolutely essential because liberalization is a pre-condition for globalization. Any reform under-taken prior to the WTO agreements does not automatically mean that its logic is based in domestic requirements. Similarly, concessions given in excess of the WTO requirements do not necessarily imply that reforms were undertaken on a unilateral basis. It could as well imply subjugation of the Indian ruling class to imperialist demands. In chapter 3, Suparna Karmakar, one of the editors, notes ‘… from a political as well as an economic perspective, international trade issues almost always are mirror reflection of domestic issues.’ Unfortunately the reverse is also true and without a framework, it is extremely difficult to distinguish one from the other. No wonder that the arguments in this book rely more on rhetoric than on a concrete analysis. Let us now take a look at some of the ‘evidences’ forwarded by the authors in defence of their thesis.

It is a fact that the current tariff rates in India on most of the imported products are significantly lower than the upper limits set by the WTO. Several articles in this volume cite the above as an illustration of India’s autonomy in economic policy reforms. Biswajit Dhar, writing on agricultural trade, notes, ‘A feature of India’s tariff commitments under the AoA is that in a large number of cases the final bound tariffs are considerably higher than their corresponding current applied tariffs … the gap is considerable even for some of the more sensitive products like cereal and pulses.’ Similarly, Samar Verma, in the context of textile and clothing industry, argues ‘India’s applied (tariff) rate, however, in 1995–96 was lower than the bound rate, at 57.8 per cent … clearly, therefore, in the case of tariffs, India has paced ahead with unilateral liberalisation at a much faster rate than that committed at the WTO.’ Nothing could have been more tautological. This argument presumes that the applied tariffs are always chosen at a level which is optimal for a country.
That is, India had full autonomy in choosing her tariff rates and its ruling class was driven by the interests of its citizens rather than the interests of multinational corporations. Unfortunately, this is exactly the hypothesis the authors were supposed to be investigating! Similar ‘evidences’ have been repeatedly used throughout the book. If such non-arguments are to be the selection criterion then the essay on telecommunication sector liberalization and the one on anti-dumping require a special mention.

Coming to the second issue, one wonders, who were the real beneficiaries of such ‘unilaterally’ decided tariff policies? Could it be the unorganized labourers, small farmers, small producers and consumers, as Rajiv Kumar suggests in his introductory article? Unfortunately it remains unanswered. No meaningful analysis of any kind is offered, and the readers are left to battle with all sorts of rhetoric. For instance, the article on agricultural trade fails to answer why nearly two lakh farmers and agricultural labourers have committed suicide since 1997, when the ‘autonomously’ decided optimal tariff policy, removal of subsidies on fertilizer, privatization of electricity production and distribution, were supposed to serve their interest. It does not answer whether the massive inflation in food items is connected to the foreign trade policies, which perhaps have opened up space for speculation, hoarding and have changed the pattern of land use. Clearly the applied tariff on pulses, which is far below the tariff upper bound (a gap of ninety percent in 2006), has not quite proved to be beneficial for the consumers (40 per cent inflation in three months)! Another article, worth reading for its naivety is chapter 10. It hopes to reform the intellectual property right (IPR) system to make it accessible for small grassroots innovators but surprisingly fails to mention the number of poor families who have benefited from IPR protection of ‘Honey Bee Network’ (grassroots level innovations) so far! However, no discussion on the impact of IPR in India’s development can be complete without discussing the health care sector. There is no special prize to guess why the editors have avoided an article on this issue.

In the introduction, Rajiv Kumar laments, ‘There has been no attempt to sell reforms to the poor, the beneficiaries…Their gains will more than compensate for losses suffered by organised labour, large farmers, inefficient trade and industry and the bureaucracy. If this message can only be hammered home, the political economy will be taken care of and governments will be able to convince sceptics that good economics is also good politics.’ After reading this volume, one wonders whether the ruling class requires a more sophisticated weapon than a hammer to ‘convince’ the poor about their ‘development’. Recent military offensive in central and eastern India bear testimony to this.