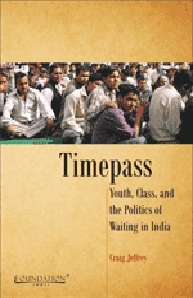 Craig Jeffrey’s book can be summed up in one equation: Unemployed Jat students of Meerut in limbo—political activism.

According to Jeffrey the suspended state of animation that young Indian men (not women oddly) find themselves in after being a bit overeducated and unemployed leads to these men being a ready crop of political entrepreneurs or at least persons who can be successfully mobilized by political parties to solve a local collective action problem. A knee-jerk response to this is that perhaps they should do some housework, learn to cook, clean up after themselves and stop sponging off their parents for the pocket money that allows them to indulge in the chronic ennui of ‘waiting’. A casual observer of this book will be surprised at how non-busy these men are. The women of their age from the same community surely are! Even more surprisingly, the writer never asked this question but ended up writing a study that tends to sympathize with Jat men and winds up throwing out at the academic community the concept of ‘timepass’—a term that encapsulates the manner in which these men are somehow forced to stand around as wastrels at nukkad tea stalls, get into fights over trivialities, gossip and occasionally talk about politics. All because they don’t have jobs! When given attention by some political notable, they feel a bit more fulfilled and are able to regain some lost masculinity.