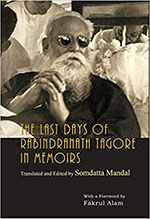 Somdatta Mandal’s The Last Days of Rabindranath Tagore in Memoirs is a uniquely conceived book that provides a comprehensive look into the final months of biswakabi Rabindranath Tagore’s life when the hallowed man was ‘oscillating between fitness and illness’ (p. 164), until he passed away after a fatal surgery performed against his wishes. The book consists of translated selections from several memoirs and biographies originally written in Bengali by the poet’s associates and other well-known writers and researchers. The editor has arranged these gleanings in chronological order and into two categories: the memoirs by five female writers as the core component of the book and two memoirs and two biographies by male writers as appendices or supplemental material. While Mandal’s primary focus is on the quintet of female memoirists, who were Tagore’s sebikas or voluntary nurses during his final months, she has included the other narratives by male authors—Buddhadev Bose, Kumar Jayantanath Roy, Prabhat Kumar Mukhopadhyay and Nityapriya Ghosh—mainly to draw a comparison between those who wrote from Tagore’s bedside and were close to his heart and those who were astute observers, with fine literary sensibilities, but lacking the privilege of the poet’s close contact. What emerges is that while a sense of duty, devotion and passion towards the ailing poet propelled the five female memoirists to record their experiences and interactions with the mahamanav for posterity, the other four, especially the biographers, wrote from a factual point of view, grounded in reason.