Impact of Militarization on Pakistan 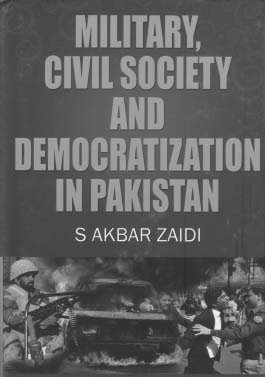 Akbar Zaidi’s book on the relationship between the military, civil society and political parties in Pakistan is primarily a compilation of what he has written in the past on the impact of militarization on his country’s national life. The travails, trauma, dilemmas and follies that the newly formed country experienced in the aftermath of its Independence on August 14, 1947 has often been clinically dissected, extensively researched and written about. Even while focusing on these issues Akbar Zaidi’s book is perhaps the first publication written by an eminent Pakistani analyst and social scientist, which calls into question the popularly held belief that ‘liberals’ and ‘civil society’ are strong supporters and advocates of democracy and elected governments in the country . While Zaidi dwells extensively on the political ethos, social structure and economic policies that emerged after Field Marshal Ayub Khan took over as Pakistan’s first military ruler, he tends to gloss over the details of the follies of its Punjabi dominated military establishment, which led to the emergence of an independent Bangladesh in December 1971.

Most Pakistani writers also refuse to acknowledge the reality that the seeds of Bengali separatism in Pakistan were sown by no less than Mohammed Ali Jinnah himself, by his ill-advised effort to impose Urdu as the lingua franca of the entire country, shortly after Independence. The other question that Pakistani intellectuals refuse to ask themselves even today is whether religion alone can be the basis for a viable sense of nationhood. Can unity be made synonymous with uniformity? While Zaidi pays tribute to the role of Jawaharlal Nehru, in building a secular and democratic India, he fails to note that this vision of a country respecting pluralism and democracy was ingrained in the minds and ethos of those who led its freedom struggle. It was this commitment to democratic freedom, secularism and pluralism that became an article of faith, which was enshrined in the Indian Constitution.