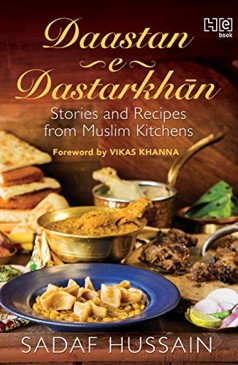 The time of impersonal recipe books with no introductions or context, is long gone. They have slowly and steadily been almost completely replaced by food memoirs, travelogues with recipes of dishes one ate around the world or history books charting the origin and evolution of various delicacies.

Three books published this year, Daastan-e-Dastarkhan: Stories and Recipes from Muslim Kitchens by Sadaf Hussain, Rajasthan ki Thaali by Suman Bhatnagar and Pushpa Gupta and Avadh ke Jaayke by Salma Hussain, take the readers on some very specific journeys within the cultures of their authors.

Written by Master Chef contestant and consultant chef Sadaf Hussain, Daastan-e-Dastarkhan is not just a cookbook but also gives a glimpse into the traditional Muslim cuisine as found in the different provinces of India. Each delectable dish, accompanied by an introduction by Sadaf Hussain and an engaging story about its origins, has the power to transport his reader into the very kitchens where these delicacies are prepared.

Let’s enter the big aangan (courtyard) of Hussain’s maternal grandparents’ house where Behari kebab, a signature Muslim dish (apart from Biryani), is being cooked for Eid celebrations. His description of this childhood memory is so evocative that we find ourselves in Bilkis Manzil, almost being able to smell the meat for the kebabs being marinated with an assortment of spices. This is followed by a special Eid breakfast of nihari, traditionally prepared and served a day after the qurbani (the ceremonial sacrifice of an animal).

The traditional recipes in the book have been adjusted and modified to suit the modern kitchen—using a mixer-grinder instead of a mortar and pestle to grind the nihari masala (spices) and cooking the meat in a pressure cooker instead of in a daigh (a large round pot) sealed with flour and left to simmer for a few hours.