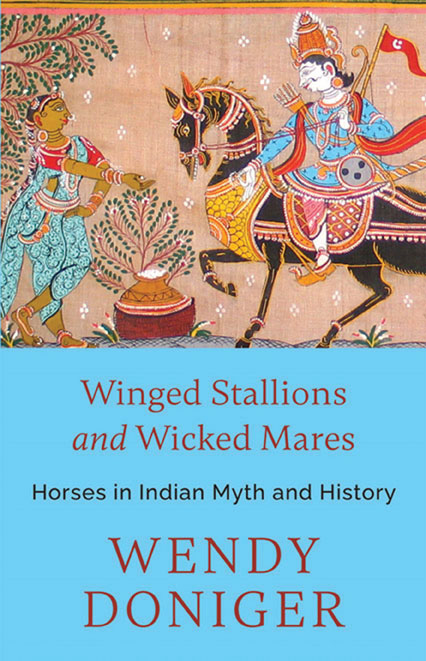 Doniger’s is a work of passion. This is on display not only in the unfolding of the narrative of her Winged Stallions and Wicked Mares but graphically in the 1968 photograph of Doniger on her Anglo-Arabian mount Damien, which although frozen in stationery pose clearly shows the elegant seat of a consummate lover of the animal. And the theme of the book revolves, as Doniger mentions in the first sentence of Chapter 1 (p. 1), ‘Horses in Indian Nature and Culture’, around the nature of the horse, stallion and mare; and how this weaves into the history of India springing from the Sanskrit and vernacular ‘storytelling traditions’, emanating almost from the birth of time. This includes in fascinating detail, in the chapter on ‘Horse Myths and Rituals in the Absence of Horses’, the account of the legend of the horse in tribal art and tradition, even amongst those tribes that may never have had experience with horses (p. 189). This is part of what the author describes as the essentiality of horses ‘to the religious imagination of India’ (p. 23). Doniger’s is the definitive work on the history of India’s ‘horsey’—a word repeatedly used by her with obvious relish— mythology, but it is not a history of the evolution of India’s horse.

The core of Doniger’s presentation, and certainly the most prized, is then in three chapters, beginning with ‘Horses in the Vedas’ and concluding with the ‘Ashvashastra, the Science of Horses’, having minutely scanned the Brahmanas (900 BCE), the Upanishads (600 BCE), the Epics, the Mahabharata and the Ramayana (300 BCE-300 CE) and the Sanskrit Puranas.

The author’s mastery of Sanskrit and of Indian mythology make this an unprecedented exploration of the theosophic history of India, virtually unexplored today, although I must warn, as the author herself does, that this academe can sometimes make for heavy reading. But this is not only from the narrator’s depth of scholarship, rather from the inducement to reflect on the ramifications of her thesis, questions that Doniger herself poses repeatedly to her reader.

Here the eternal role of stallions as heroes and mares as seductresses is sourced to the Sanskrit of the Rig Veda (p. 34). Any student of India’s history will know of the Ashvamedha, the apogee of assertion of imperial might in ancient India. This certainly set the tone for stallion as hero and source of sexual transcendence. But the sacrifice was hardly a glorious act, and Doniger describes the gory details culled from the original writings. Thus the Rig Veda intones to the sacrificed animal, ‘Whatever runs off your body when it has been placed on the spit and roasted by the fire, let it not lie there in the earth or on the grass, but let it be given to the gods who long for it…and who (overseers of the cooking of horseflesh)wait for the doling out of the charger’s flesh—let their approval encourage us.’ The hymn closes with the words (p. 36), ‘Let the horse with our offerings achieve sovereign power for us.’

The stallion is also the most virile of creatures identified in the Brahmanas with Lord Indra. The Sathapatha Brahmana says, ‘I fumigate you with the dung of the stallion, the impregnator, for the stallion is an impregnator.’  The description of the sexuality of the stallion finds echo in descriptions such as the Harivansha (c. 300-500 CE), ‘the queen approached the consecrated stallion and lay down beside him, according to the rules of the ritual’ (p. 47). ‘The politics of sex’, Doniger writes, ‘are matched by the eroticism of political power’ (p. 46).

In juxtaposition is the Vedic myth of the goddess who is personified in the mare Saranyu. ‘Saranyu is the Vedic evil mother’ (p. 39), endowed with so acute a sense of smell that allows her to identify her mate and to conceive by him. Thus ‘from the semen that was inhaled twins were born, the famous Ashvins’ (Brihaddevata, p. 40). The Vedic tradition establishes a deep connection between horses and the ocean, the name of the underwater horse being ‘Jvala Mukhi’ (p. 72), the underwater mare Aurva becomes metaphor for ‘a voracious or insatiable energy’ (p. 78). So, as posited by the writer, ‘the Saranyu story raises theological questions about the origin of the human race and human death, about appearance and reality, about the relationship between male and female divine powers and between humans and the divine and the equine’ (p. 17). As the author concludes in her commentary on the Vedas, ‘Horses as symbols of unbridled, or bridled passions form a motif that we will be able to trace throughout Indian literature.’ And true to her word Doniger, after describing the dissipation over time of the mythology surrounding Ashvamedha, particularly its sexual innuendo, quoting Alberuni’s Kitabul Hind on India of the 11th century and Ralph TH Griffith at the close of the 19th makes repeated reference to ‘horses and human sexuality’ (p. 70).  ‘Where the Vedas valued the martial power of horses, the Upanishads feared their sensual power’ (p. 54), resulting in ‘the twisted connection between horses and fire, snakes, rivers, the ocean and the underworld, a connection that begins in the Vedas and blossoms in the Mahabharata and the Ramayana, continues to colour stories about horses throughout later Indian history’ (p. 69)

The Indian science of horses is discussed in the passages of the Ashvashastras, including supportive texts. Here feeding, dispositions, gaits and anatomy, neighing, smell and character are all scrutinized, but Doniger’s conclusion is that although the Ashvashastras, including a Farsi Ashvashastra were part of a ‘rich textual and oral appreciation of horses in India, they contained no useful information’ (emphasis in the text). Sadly, then, Doniger, quoting the Rajput saying, ‘A man who reads doesn’t ride’ as a truism for the gamut of India’s horse throughout history finds little ‘practical detail’ in the Ashvashastra.

The author describes John Lockwood Kipling’s illustrated book of 1891, Beast and Man in India: A Popular Sketch of Indian Animals in their Relations with the People, as ‘a work of stunning bigotry and Orientalism’ (p. 177). Albeit an outstanding scholar herself, with her work filling an exclusive niche in Indian history, she is not a professional historian. This is evident from casual comments like in the opening chapter that the culture of the Indus Valley Civilization ‘had no connection with the Vedic world’ going on to the contradictory finding that horses are ‘lovingly depicted’ in Indian art, literature, story and ritual ‘throughout Indian history’ (p. 1, emphasis mine). The author’s own proclivity to Orientalism impairs the otherwise exhaustive expanse of her account because although she recognizes ‘familiar colonial tropes’, her work is informed with repeated reference to Muslims, together with the British, as foreign to India. In consequence, community is repeatedly identified by religion rather than occupation, as was the Indian tradition. Thus, there is a whole chapter titled ‘Buddhist Horses’ which relates the charming and reverential tales of Kanthaka, the mount of Prince Siddhartha, but tends to dichotomize ‘Buddhism’ from ‘Hinduism’. Worse, although there is indeed extensive discussion of the contribution of Muslims to the evolution of the Indian horse in the chapter ‘Arabian Horses and Muslim Horsemen’, the sub-chapter titled ‘The Indian Appreciation of Foreign Horses’ opens with referring to these as ‘the foreigners’ attitude’. There is a rich discussion of ‘Rajputs and their Horses’, who were amongst India’s finest horsemen, but were no horse breeders.  In Chapter 9, ‘Equestrian Epics and Mythic Mares’, despite repeated references to the fabled horses of the Northwest as India’s best, there is no such extensive account of horsey traditions in these traditional Indian heartlands. This inevitably detracts from the holistic nature of the book, keeping it from cohesively covering Horses in Indian (rather than simply Hindu) Myth and History.

Wajahat Habibullah is former Chairperson of the National Commission for Minorities. Prior to this, he held the position of the first Chief Information Commissioner of India. He was an officer of the Indian Administrative Service from 1968 to 2005.