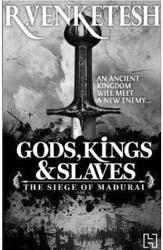 Gods, Kings & Slaves is the story of two primary protagonists, both known to history. The first protagonist is Veera Pandyan of Madurai, and the other is a Hindu boy from Gujarat, who becomes Malik Kafur, Alauddin Khilji’s famous general.

What the author does extremely well is to take characters from our history about whom we do not have much information, but are known enough so as to not appear fictional characters to the lay reader. The conquests of Alauddin Khilji, the grandeur of the Pandyan Empire—these are narratives well known to us. The author has taken these narratives, and tried to bring them to life, filling in the gaps in evidence with his own plots and fictional devices. Filling them in so well that it becomes hard to tell where history ends and the fiction begins.