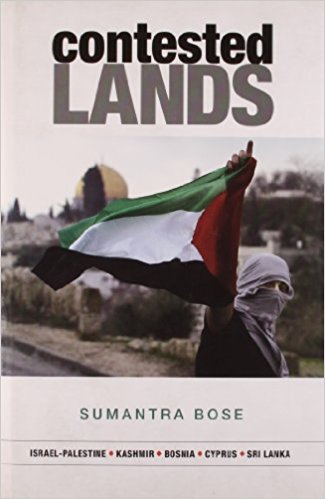 This book deals with some of the major heartlands of ethnic conflict in today’s world—Israel-Palestine, Kashmir, Bosnia, Cyprus and Sri Lanka. The author presents the centrality of territorial claims and says that the main challenge to peace-making processes lies in the attempts that have been made to resolve these to the satisfaction of the conflicting groups. The book attempts to show through a detailed analysis of the different arenas of conflict the immense and almost intractable difficulties involved in the entire process of drawing stable borders/boundaries between different ethnic nationalities which are trying to carve out distinct political spaces for themselves. Drawing copious examples from Sri Lanka where the Sinhalese majority has been consistently resisting Tamil demands for territorial autonomy and from Bosnia where the Dayton Agreement has been trying to bridge irreconcilable differences between the Serbs, Croats and the Muslims, Sumantra Bose tries to build up the thesis that only through international third party intervention can such conflicts be resolved and real peace be achieved. However, an obvious flaw in Bose’s argument seems to be his persistent espousal of US intervention in conflict zones as the only way towards conflict resolution.

He seems to have unquestioning and implicit faith in American diplomacy backed by military prowess and says as much in his Introduction: ‘The identity of the third party (or parties) varies across the cases in this book, from Norway in Sri Lanka to the United Nations in Cyprus and the United States in the Israeli-Palestine conflict, as does the nature of the third party’s role. Yet a strong case emerges for the deployment of American leverage or influence from the examples of Bosnia (where the late 1995 peace agreement that terminated the war was engineered by purposeful diplomatic intervention backed up by military power), Israel-Palestine, and even Kashmir’ (p. 3). Again in the concluding chapter, Bose clearly states: ‘This book has argued that the United States holds unique leverage and influence, globally and in particular world regions, that equip it to play the role of constructive third party with decisive results. If played well, such a role can significantly enhance American interests and American prestige across the world’ (emphasis added). At least the author has the candour to admit that American interests have always been uppermost in that nation’s peace initiatives and that this has, at least in the case of Palestine, contributed greatly towards preventing a just solution of the conflict. In his chapter on Israel and Palestine when he refers to President Truman’s statement that he would have ‘to answer to hundreds of thousands who are anxious for the success of Zionism’ whereas he did not have many Arabs among his constituents. Anyone even with a cursory knowledge of the Palestine problem should not have much difficulty in seeing through the nefarious game that the US-UK combine has been playing right from the beginning. It is, therefore, natural that Bose’s support for the US role does not seem to gel with his brilliantly argued chapter on Israel and Palestine where he displays a sense of rare objectivity in presenting the Palestinian side of the problem.

The book is divided into five major chapters where the contested lands are discussed. The first chapter is on Sri Lanka where the author traces the different stages in the Sinhalese-Tamil conflict leading eventually to a civil-war situation in that island. While the general tenor of the argument in this chapter blames the chauvinism of the Sinhalese leaders for the rise of Tamil militancy, yet Bose notes that it was the ‘hardline’ Sinhalese nationalist Chandrika Kumaratunga who had initiated the first ceasefire between the Sri Lankan government and the LTTE in 1995 and had come up with proposals for devolution of power which, in retrospect, appears as the closest to a viable peace agreement between the two parties to the conflict. According to the author, the peace process has stalled in Sri Lanka because of the incremental strategy of peace building which has given an upper hand to the ‘spoilers’ like the JVP and the ‘likeminded Buddhist clergy’. While downplaying the Norwegian role in Sri Lanka as that of a small ‘do-gooder’ country which is not taken seriously by both sides to the conflict, Bose advocates ‘a more robust third-party intervention by a more powerful player’ which obviously is once again the United States. Although Bose’s detailed account of the crisis in Sri Lanka makes interesting and informative reading, yet it must be said that he fails to move out of the structured groove while discussing Sinhalese-Tamil relations. Obviously, Sinhalese nationalism has been responsible in more ways than one in creating the violent divide between the two major communities. But that is surely not the entire story. The historical compulsions that gave rise to a strident kind of Sinhalese nationalism are not addressed by the author who seems to fall into the trap of simplistic reasoning when, for instance, he refers to the Janatha Vimukti Perumana (JVP) as an ‘ultra-nationalist’ outfit and Chandrika Kumaratunge as a hardline Sinhalese nationalist. The chapter on Sri Lanka would have gained a lot had Bose been less partisan towards the Tamil insurgents and tried to balance the rise and consolidation of Sinhalese nationalism with the tactics adopted by the LTTE to undermine the Sri Lankan State in the guise of creating a more federal nation.

Bose’s chapter on Bosnia is easily one of the best and gives the reader a clear view into the complexities involved in the struggle of the Serbs, Croats and Muslims for territorial sovereignty. The author is quite critical of the role of the international community during the early phase of the Yugoslav crisis and says that it would have been a sounder approach had the former ‘insisted on the continuation of the Yugoslav union, premised on non-recognition of unilateral declarations of inde-pendence by component units and intensive international efforts to mediate accommodation between the chief protagonists’.

The author refers to Bosnia’s history as a frontier society where collective identities emerged and developed on the basis of ethnonational communities. Hence, he feels that the ‘wider, sheltering framework of a Yugoslav union was essential to Bosnia’s internal stability.’ Bose expresses his reservations over the referendum decided by simple majority rule while one third of the population consisting of a particular ethnonational group boycotted it and insists that this conventional principle of democratic decision- making based on a simple majority, is neither appropriate nor valid when the ‘rightfulness of the unit of sovereignty and governance is itself contested’. This is an interesting point which has relevance to demands for referendum made in our own country both by the Kashmiri and Assamese militants. Bose gives due credit to the Americans for having brought about the Dayton agreement which effectively tried to reconcile the deep polarizations that have taken place in Bosnia, although the Bosnian Muslims still think that the state is far too decentralized in favour of the Serbs and the Croats. One is tempted to agree with the author that Bosnia presents an example of a successful case of international peace-building despite the fact that the ethnic mosaic of Bosnia seems lost for ever. But it would certainly be unrealistic to apply the same model of international intervention in the other trouble spots of the world.

Regarding Kashmir, Sumantra Bose argues that a solution involving ‘self-rule’ for the Kashmiris would have to be hammered out and the Line of Control should be transformed from a ‘a barrier to a bridge’. He advocates ‘a combination of robust autonomy and systematic cross-border linkages’ as the only way of reconciling, however uneasily, the three contending nation-state perspectives on Kashmir. Drawing from the experience of the Bosnian plebiscite, Bose rightly rules out a plebiscite for Kashmir at this stage and puts forward self rule, power sharing, and cross-border cooperation as a way out of the tangle. He suggests that the principles enunciated in Shimla in 1972 and Lahore in 1999 could provide the starting points and guidelines for the peace process in Kashmir. But almost in the same breath he negates bi-lateral initiatives by calling for a greater degree of international engagement to solve the Kashmir issue. And, of course, it is the ‘sole global superpower, the United States (which) is the most plausible “third party” with the reach and clout to contribute to the prospects of a settlement, since it has direct leverage over Musharraf’s Pakistan and considerable influence with India . . .’. Bose seems to be unaware of public opinion in India which would never favour a third party intervention and would always support a bi-lateral agreement, however difficult that might look at present. Bose’s advocacy of third party intervention and power sharing between the ‘representatives of the pro-independence, pro-Indian and pro-Pakistani segments of identity and allegiance (and between pro-Pakistan and pro-independence segments in Pakistani-controlled Kashmir ) seems rather utopian and out of touch with the realities of the situation, especially with Pakistan still quite removed from the democratic process. Moreover, while talking about the peace process in Kashmir, the author’s analysis could perhaps have been enriched had he drawn from India’s own experience in tackling diverse autonomy demands within the country.

Though the author states in the concluding chapter that the book has attempted to study certain cases which are of a ‘generic type’ dealing with ethnonational conflicts rooted in clashing ideologies and agendas of collective ‘self-determination’ and that it is logical that the nature of solutions would conform to a pattern, yet, given the unique historical factors and complexities that mark each of these conflicts, such an attempt is bound to be frustrating. Moreover, Bose’s reservations about incrementalism as a peace-building strategy and his plea for third party intervention (read United States) in all these conflicts are, to say the least, quite unconvincing, especially given this country’s experience with the peace making process in the northeastern region where questions of autonomy, territoriality and federal re-structuring of powers occupy central place. Therefore, the author’s contention that ‘peace processes will not emerge and peace settlements will not materialize in enthnonational sovereignty disputes without external, third-party engagement’ would certainly not be acceptable to many readers. Having said this, one must add that Bose has at least dared to offer some solutions, however flawed his model might be. Finally one would like to say that all the chapters in the book are well researched and well argued and the volume is a welcome addition to the growing range of works on peace processes and conflict resolution.