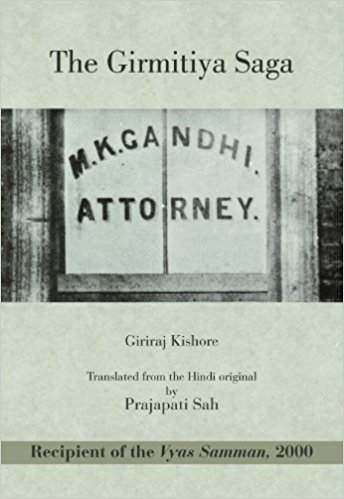 One must thank the publishers and the translator for making Giriraj Kishores Pehla Girmitiya available in English. Published first in Hindi in 1999, it has taken this award winning novel more than a decade to arrive in English. It is a huge book, and not just in length but also in its scope and intent. The Girmitiya Saga is not just a book about Mohandas Karamchand Gandhi, it is also a book about the times. Dealing with Gandhis years in South Africa, this is a book about the era of colonization, an era in which the apartheid policies were being tested and could be and were checked, an era which saw the birth of a political toolof nonviolent strugglethat was to shake the foundations of the worlds major empire and eclipse the sun that never set on it. It was the era that was to give birth to a great political star Mahatma Gandhi.

The Girmitiya Saga looks closely and affectionately at the life of Gandhi, his years of struggle, in South Africatrying to show how his awareness of his own status as a girmitiya (a bonded labourer, one who signed an agreement, a word that could only be pronounced as girmit by the labourers) made him identify with the fate of all girmitiyas and allowed him to fashion the tools of struggle against oppressive regimes. The sahib becomes the prime coolie, the first and foremost girmitiya, in this saga. Giriraj Kishore gives us the man and his warts very much in view, even if Giriraj Kishore does not want to give us a close look at any negatives in Gandhi and his life.