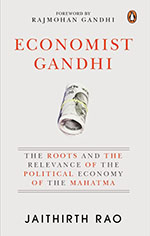 Gandhi is possibly the greatest Indian to have lived since Buddha. His greatness, however, lies not in his invulnerability—but rather, in his struggle to overcome his many frailties. Gandhi’s story is an alluring, yet rare, tale of the triumph of human will over seemingly insurmountable odds. One is reminded of Albert Einstein’s famous phrase describing Gandhi, ‘Generations to come, it may well be, will scarce believe that such a man as this one ever in flesh and blood walked upon this Earth.’

If an occasional flourish can be forgiven, one might even suggest that Gandhi’s life was an allegory, his death a metaphor, and his afterlife an unsettled debate. Arguably, no other person in recent memory has been put under the microscope of evaluation so completely as Gandhi has been. As a result, Gandhi has become, in a large measure, a subject of hermeneutical delight; an open book, lending himself to ready investigation and exegesis aplenty. This means that each aspect of his life is minutely examined, each word weighed with care, every action measured with precision, every secret is rummaged through with diligence, and even his silences are sought to be understood by authors, commentators, critics and admirers alike. Gandhi means many things to many people; he is both apprehended and misapprehended.