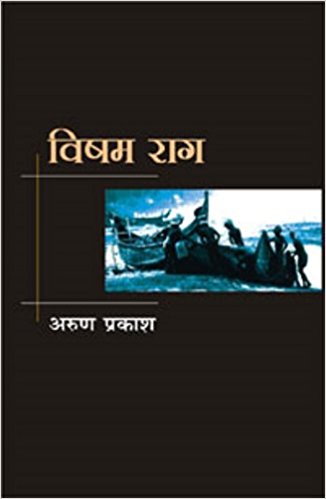 Eight fragile human figures, an equally fragile boat, the churning sea in the background – the stark matte black cover with a blue tinted black and white photograph of everyday beach life, fisherman hauling their catch – is a telling picture of this collection of Arun Prakash’s short stories. Written over thirty years (the first story of the collection was written in 1971, the last one in 2002) they are all about bringing to the fore the daily struggle of the ignored, the overworked, the marginalized. These eminently readable stories are peopled by characters one comes across everyday but hasn’t had the time or the inclination to go into the details of their lives. Prakash is essentially a miniaturist of the classical school. He creates his characters and the background against which they act out their existence in meticulous detail. The frame may look small, the scale of lives lived and its struggle certainly isn’t that. The figures he depicts are definitely not of heroes in the traditional mould. Not by the farthest stretch of imagination could one expect them to emerge victors (the lone exception being Sundari Maami of ‘Naa’), not in the contemporary scenario.

The flap of the book states “to conserve the main voices of the times is the responsibility of History, to preserve the smaller echoes that of literature”. The stories of Visham Raag do just that. These deceptively simple documentaries unveil complex forces exerting complicated pressures on men and women of a very here-and-now world. And also the witty, pro-existence responses of the protagonists. In ‘Uth Miss Tapna Katha’ the essential girl next door Narmada alias Nimmo is coerced into appearing on the stage in a swimsuit and thrown out of the uncle’s house as a consequence. Our heroine sees her chance to be rid of middle-class hypocrisy and pettiness once for all—riding the wave of her brief fame she starts her own fitness centre (with the prospect of developing into a “supplier of services” to the rich and powerful) and moves to a better locality. The moralists may well indulge in hair-tearing and chest beating over this “shameless surrender to market forces” but then aren’t market forces a reality of our times? Shouldn’t one find a way to combat them? After all we don’t know Casablanca beyond the burning ship. Do we? Nammy the erstwhile Narmada is then a case of “if you can’t beat them, join them”. We know, someday she will beat her puppeteers at their own game.

Prakash has captured life in sharp focus. No kind shadows smoothen out the wrinkless, no kicklights create romantic haloes. This is cinema verite at it’s starkest. High on faith the old priest of ‘Jul Praanttar’ refuses to desert the deity in the flooded temple, dies of snake bite and in the end is found as the festering corpse that makes the young son sick (literally). The initial shock at this decidedly unpoetic end of a life of faith paves the way for honest scrutiny—and reluctantly one has to concede that faith here was only spiritual lethargy, a lazy man’s getaway from the everyday grind of life. Decidedly unromantic, but one can’t fault it when it comes to reality and logic. In this adult world of harsh realities faith is a fragile anchor. So is love. So is dream. The only times faith and love have any likelihood of sustaining human beings are when they are aimed at the self. With an unwavering eye on reality. Sundari of ‘Naa’, Anita Rao of ‘Bahut Achchi Ladki’, Kammo of ‘Visham Raag’, Veer Singh of ‘Phir Milenge’ reject the statusquoist mores so dear to the middle class and collectively create an intelligent, positive code of values. Sucha Singh (‘Ek Zindagi Sthagit’), Neelam (‘Ek Achchi Ladki’), the Narrator (‘Swapna Ghar’) on the other hand refuse to accept reality and are heading towards certain self destruction.

Visham Raag is a collection of thirty-two short stories written over as many years. The stories echo the footfalls of time and in doing so are a rude jolt to our collective complaisance. Divided into two sections the first part (fifteen stories) is focussed on women struggling to claim their own fragment of the sky. Unlike womenly women they complain, scream and defy, they are trying to forge their own idiom, to de-woman themselves. Other stories have the unrest in Punjab, the economic reforms, the rotting social and political institutions for background. And the foreground has little men and women trying to come to terms with life—on their own terms.

Madhu B. Joshi is a freelance writer and translator. She lives in Ghaziabad.

CDN and the Horizon of English Studies in India
February 27, 2018

CDN and the Horizon of English Studies in India
January 11, 2018