For the Sophisticated Tastebud 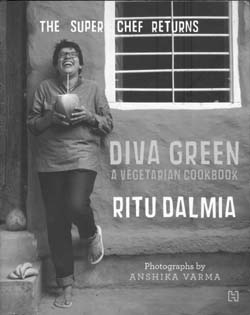 India is perhaps the best place to be a vegetarian. Unless you want one, your options while dining in or out are never restricted to a bowl of steamed vegetables. I suppose poverty and religion have a lot to do with why food from the subcontinent utilizes and emphasizes lentils, vegetables, grains, and dairy products to create wholesome vegetarian meals that are so difficult to find in other cuisines.

As the country becomes more globalized, as foreign-educated students and software engineers return home, as Master Chef gets its domestic avatar, and as international cooking shows gain viewership in homes previously used to lessons from Tarla Dalal and Sanjeev Kapoor, the face of vegetarian food in city- and small-town India is changing. Exotic ingredients of yesteryears—broccoli, avocadoes, asparagus, parmegianno regianno—are not as difficult to find in your local grocery store as they were a decade ago.

Ritu Dalmia is part of a new generation of chefs and restaurants that cater to, inform, and define the tastes of consumers who are increasingly more willing to experiment with unfamiliar dishes, at least when they eat out. Although home-kitchens of people who dine at Diva and Latitude 28 are quite likely to be inhabited by the hired cook or bai, the recipes in Diva Green have just the right combination of ease, taste, and variety to motivate some of them to experiment more with non-traditional home cooking.

There are ninety recipes in the book—organized into ten chapters based on main ingredients such as potato, mushroom, and greens. Ritu borrows a host of them from her family, friends, and other chefs—for example, the Tomato and Couscous Salad comes from Yotam Ottolenghi’s Plenty. Beautiful photographs—a rarity in most Indian cookbooks—and interesting tales and anecdotes accompany each chapter. As expected of a Ritu Dalmia cookbook, there are a lot of Italian-influenced recipes in Diva Green. However, one can quite easily travel through the rest of the world via her Burmese Tomato Salad, Jordanian-style Labneh, Indonesian Plecing Kangkung, Bengal-style Begun Bhaja, a Middle-Eastern Green Pea Falafel Burger, New York New Year Cheesecake, Peruvian Papa A La Huancaína, and a Syrian Christian Papaya Curry from Kerala.

An interesting aspect of the book is the emphasis placed on often-ignored and vilified ingredients such as pumpkins and beetroots. They are used in unique and imaginative ways as primary ingredients for soups (Pumpkin and Coconut Soup), salads (Beetroot and Green Mango Salad), dips (Pumpkin and Feta Cheese Dip), risottos (Beetroot and Pearl Barley Risotto), fritters (Sweet Pumpkin Fritters), soufflés (Beetroot Soufflé), as well as drinks (Beetroot, Pineapple and Ginger Cooler).

Ritu also devotes a chapter to some basic recipes for stocks and sauces such as basil pesto and béchamel. In addition, there are helpful meal plans like the Lunch for Hot Summer Day and Picnic Hamper to effectively organizing what can sometimes feel like an incoherent collection of wonderful recipes.

My favorite representative recipe from this book is a simple Zucchini and Basil Salad, originally from The River Café Cook Book. Frankly, my expectations from this dish were very low. It is a raw zucchini salad with a basic orange juice dressing. What could be so exciting about that? Or so I thought. It took me no more than fifteen minutes to prepare this dish and much less time to finish eating it. Thinly sliced zucchini slices soak the orange dressing—mellowed by the olive oil and slightly sweetened by the fragrant basil—and are rendered creamy and salty by the grated parmesan cheese to turn into a surprisingly tasty and refreshing salad fit for lunch on a warm summer day.

There are many such surprises in Diva Green.

Zucchini and Basil Salad Ingredients 3 medium zucchini, sliced thinly A handful of rocket leaves A handful of basil leaves 30g Parmesan cheese, grated or shaved 30ml extra virgin olive oil 3 tbsp fresh orange juice 1 tsp pink peppercorns (in brine) Salt and pepper to season Method To prepare the dressing, whisk the olive oil and orange juice together in a bowl. Season with salt and pepper and add the pink peppercorns. Toss the zucchini and basil with the dressing and let it stand for about 10 minutes. Arrange the zucchini on a shallow platter and top it with the rocket leaves and Parmesan shavings. Drizzle with any dressing that you may have left in the bowl and serve as a side salad or a very fresh first course. S. Anukriti is an Assistant Professor of Economics at Boston College, Boston and the editor of The Boston Coffee House.