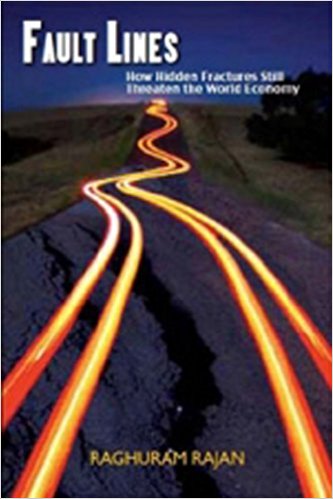 Raghuram Rajan is a significant figure in the international financial landscape and nowhere more so than in India. He is currently Professor at the University of Chicago in the US but he was also Chief Economist at the International Monetary Fund from September 2003 until January 2007. He was the head of a Committee on Financial Sector Reforms set up by the Government of India and still is Honorary Economic Advisor to the Prime Minister of India. So there is no question that his views are important. This particular book is a distillation of his views on the origins of the global financial crisis that originated in the US in 2008 and how it was not a single one-off event but the result of several deep and systemic problems (that he calls fault lines) in the world economy.

The book is written in an easy and approachable style which explains at least partly its great commercial success. The analysis is given additional authority not only by Rajans impressive CV but by his claim of having predicted the crisis at a time when US policy makers were adamant in their refusal to recognize any kind of bubble in the system.

This prediction came in the form of a paper presented at the Annual Conference of the US Federal Reserve in Jackson Wyoming in 2005. This conference is known to be a famous watering hole of important central bankers. In his paper he argued that skewed incentives in the financial system had made both financial activities and the world economy inherently riskier. He claims in the preface to this book that at the time he was derided and ridiculed for making such an argument.