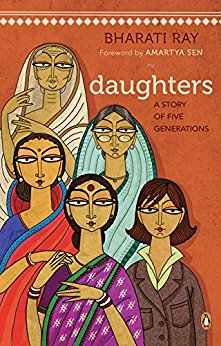 To me the Bengali title that alludes to an older well known work, Rajnarayan Basu’s Sekaal O Ekaal, seems more appropriate than the English title. Ekaal Sekaal —Now and Then—would lead the reader to expect a story meandering between the present and the past. Daughters, on the other hand, gestures towards the much-interrogated mother-daughter relationship and builds up the kind of feminist expectations that, to my mind, are bound to remain unrealized in a story that celebrates the extended family. Undoubtedly the book is about five generations of exceptional women. The writer, Bharati Ray, was the first woman Pro-Vice-Chancellor of Calcutta University; founded the Women’s Studies Research Centre at the university and is currently Vice-President of ICCR. Her daughters are well-regarded academics. The three generations of ancestresses whose lives she narrates: Sunder-ma, Didi-Ma, and Ma were strong and unusual women of their times, more erudite and educated than most others.

However, none of the female characters except Ray’s daughters, whose lives she outlines very briefly, are perceived to be challenging patriarchy in any significant manner in the book. Even regarding Tista, her daughter who divorced and re-married, Ray observes with maternal pride: Tista has no children but she is deeply attached to her husband and the affection is reciprocated. A beautiful partnership!