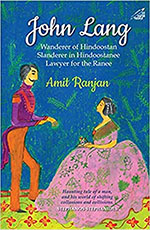 Amit Ranjan’s book John Lang poses a conundrum quite like the persona of the protagonist. Who was John Lang? Columnist, creative writer, lawyer, rebel, alcoholic or just a stupendous wit, masquerading as all of them? I have grave doubts about whether he was really an alcoholic or was it a rumour that suited his humour. There is no such entity as almost an alcoholic. Either one is an alcoholic or one is not, no half measures! Anyone who is a true-blue alcoholic has no time or energy to be a prolific writer and a full-time journalist to boot. Wit requires thinking on your toes and having all your wits at your command to fashion, even a repartee or a riposte, let alone a whole exposition.

Lang’s wit was of a more killer brand than that of a verbal duellist. It laid bare the working of the corrupt systems of not one but three countries, and all their systems, be it the military or judiciary or bureaucracy. For that matter, the elite who considered themselves racially superior, or the self-righteous, pretentious guardians of morality—were equally the subject of derision.

Which country did John Lang belong to—Australia, England or India? Born in Australia; educated in England and resident of India, undoubtedly. But his parentage in Australia was of doubtful lineage. Was he the scion of convicts? He was not only educated in England but had the dubious or perhaps bona fide honour of being expelled by a British University. I consider being expelled from a self-righteous, conservative, rules-ridden university more vital to getting a real education than a degree earned by conforming to the dry rules of scholarship.