Evolving Order Out of Chaos 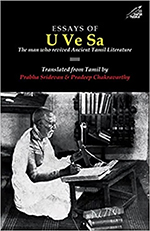 Evolving Order Out of Chaos
Aazhi Arasi
ESSAYS OF U VE SA: THE MAN WHO REVIVED ANCIENT TAMIL LITERATURE by Translated from the Tamil by Prabha Sridevan and Pradeep Chakravarthy Niyogi Books, 2022, 240 pp., 445.00
July 2022, volume 46, No 7

When millennials are used to having the world’s knowledge at their fingertips, it is hard to imagine a time when people undertook arduous journeys to gather whatever little knowledge that they could. Uthamadanapuram Venkatasubbayyar Saminatha Iyer’s (commonly, U Ve Sa) writings give us a glimpse of that era and the life of a man who strived and sought to recover the palm leaf manuscripts of long-forgotten Tamil literatures without yielding to material and human impediments. The man, whose life spanned about four decades each in the 19th and 20th century (1855-1942), is remembered fondly by the people as ‘Tamil Thatha’ (Tamil Grandfather) for the quests that he embarked on for rediscovering, reconstructing, and publishing the Sangam poems, and the Tamil epics, Silapadikaram and Civaka Cintamani. In addition to these, he has his own repertoire of writings consisting of autobiographies, letters, prose pieces, poems, and explanatory notes. Except for his autobiography, none of the other works has an English translation available, and Niyogi Books’ Essays of U Ve Sa: The Man who Revived Ancient Tamil Literature is a step taken to rectify this unfortunate situation. The book is published under the Translation Initiative of the Tamil Nadu Textbook and Educational Services Corporation to ‘enhance the reach of Tamil antiquity and tradition.’

Essays of U Ve Sa is a collection of 29 essays by U Ve Sa from his various collections covering a wide range of subjects. The selection and translation of the essays are done by Prabha Sridevan and Pradeep Chakravarthy. The foreword is by the writer Perumal Murugan. Since the book is intended as an introduction to U Ve Sa for the non-Tamil readership, the book also begins with a chapter ‘U Ve Sa: Who Was He? Why should you know him?’  and ends with a glossary of Tamil words for quick reference.

The essays selected are representative of the many facets of U Ve Sa. Not connected by a common theme, they deal with a variety of subjects such as historical accounts, personal experiences, and educational pieces. Some read better than the others. The stories of brave kings and their generosity, his teacher setting a proud student straight, finding knowledge in the unlikeliest of places, the quest for manuscripts and the curious cases of humans being hurdles (rather than material difficulties), and his interactions with his students are particularly interesting.  The readers witness the lost world of generous patrons, non-commercialized education, and a culturally rich and scholarly Tamil Nadu.