Eternal Dimensions of An Enigma 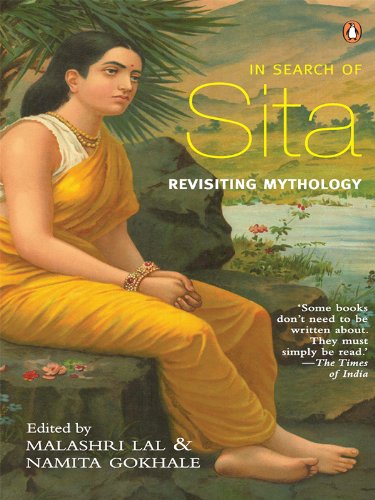 Like manna from the skies or the well-timed appearance of an oasis to a thirsty wanderer in the desert comes this publication, heralding a critical moment in the study of Indian mythology. And I speak as one with a stake in the venture, who happens to be not only a Hindu, but also a writer with her own views, having published Sanctuary!, a play, in Sri Lanka in 2005. For someone in my position, then, this anthology of Commentary/Dialogue/Version/Interpretation (the four divisions in which the contributions have been arranged by Lal and Gokhale) could not have come sooner. Here, for the first time is to be found collated a wide selection of views and opinions on Sita’s predicament, ever since Valmiki first presented his controversy-creating Adikavya around almost 2500 years ago. Along with his problematic Adi-Nayika, portrayed as an icon of virtue who returns without so much as a scratch upon her skin from the hands of the villain, her abductor, only to face a lifetime of sorrow and humiliation with the sufferings inflicted on her by the hero, her upright, moral husband!

The editors’ invocation is ‘to all the incarnate goddesses and to Bellisima, the lady of the waters, at Bellagio,’ while acknowledging ‘gratitude to the Rock feller Foundation for the fellowship at Bellagio which provided time and space to work onSita.’ And the cover painting by Raja Ravi Varma ‘depicts the abducted goddess, alone and brooding, yet with a flash of fire in her eyes . . . evocative of past and future exiles, of her loneliness and strength . . . (creating) a new, composite archetype of Indian womanhood for the Indian masses’ (Aman Nath). This sets the tone for the anthology, and Gokhale in her brief foreword, situates her search for Sita in the botanical gardens of Peradiniya, Sri Lanka, with the question: ‘Why do I picture her weeping?’. . . . And further: ‘Indian myth is morally ambiguous. . . . (however) The diversity of India encourages the depiction of many Sitas. . . . We (Lal and Gokhale) wish to foreground Sita’s voice and her subversive authority’.

And it is just that, Sita’s voice with all of its stoic silence and enduring suffering that is discussed, debated and amplified in the 36 contributions from academics, activists and social workers, artists and dancers, creative writers, poets and translators, film makers andfeminists, mythologists and anthropologists, not excluding a member of the British peerage and a Jungian therapist. (Without forgetting to mention a brief section devoted to Sita in Victorian prints!) And the contents span the entire gamut of reactions, from the ultra-traditional to the fiercely iconoclastic. The source material is not restricted to Sanskrit lore but resonates with folklore from across India, translated from the versions found in regional languages, Assamese/Bengali/Maithili/Marathi//Pahari/ Tamil/Telugu/Oriya (boasting of texts composed by ‘sudra’ authors in protest against the Sanskrit) and Bhojpuri (the songs from the last, especially, striking a poignant note of anguish and dread laced with tenderness, lamenting Sita’s fate). Out of the 36 contributors, 27 are women from varied professional backgrounds. It is, in a nutshell, a commendably representative and exhaustive effort.

I need to quote from the book, at random, in order to provide a sampling of what waits a reader. Lord Meghnad Desai comments astutely: ‘As a wife and indeed as a character in the Ramayana, Sita is strangely absent, Valmiki allows her very little space. . . There is a puzzle here.’ And abandons the subject soon after to contemplate and critique Other Women in The Ramayana/Women in The Mahabharata! Devdutt Pattanaik perceives more: ‘The Earth can be wild or domesticated. Wild, she is the forest. Domesticated, she is the field. Wild Earth is visualized as Kali, domesticated Earth is visualized as Gauri . . . Sita is Gauri . . .’ Tarun Gandhi sees in Sita the symbol of satyagraha. He questions: ‘Why should Sita be portrayed as rebellious, uncompromising, courageous and independent . . . in the mould of Beauvoir or Betty Friedan?’ Whereas Imhasly-Gandhy (the Jungian psychotherapist) points an accusing finger at the process of brahmanization/Sanskritization seen as upholding rigid standards of male-female relationships, whereby the male is unable to relate to the feminine principle. For one dancer, the traditional narrative revealed a mother lode of feminine energy, whereas another felt that one must question mythology in creating dance and drama, as she saw the electronic media simply reinforcing patriarchal values whilesocial development moved in another direction. For one filmmaker (of animations) Sita’s walk through fire is a heartbreak experience, and her jump into the lap of Earth almost a ‘moksha’ moment. For another, instead, nothing will change until our role models and icons do, ‘until we redefine the image of Sita’ (her contention being she is, after all, an imaginary ideal), for, as she puts it, we burn our brides in a sort of agni pareeksha hangover! And Sita’s basic condition of lack of parentage is seen to reverberate in societal ramifications of the girl child viewed as the essential orphan. And so on, and so forth, with the debate ranging ever far and wide, there can be no closure at any given time to the issue of Sita and her story for this is still our legacy, unquestionably ours, the quintessential burden borne by our collective consciousness. Does no one remember Irawati Karve, the first to remark in her epoch-making Yuganta (1969?) The story of Sita begins in the approved fashion but departs from the classic formula in its end, which is the self-destruction of Sita . . . and her tragic end has remained an unhealed wound in the hearts of Indians. Why did the poet allow Sita to be abandoned?’

Why, indeed? Her question is still ringing in our ears, still to be answered. Yet, one answer may be proffered, though at the risk of sounding fatalistic: this is our story, Sita belongs to India, her fate mirrors the essential dichotomy of the female of the species in our country. And our poets/writers/filmmakers must grapple still with the eternal dimensions of the enigma that is her tragedy, just as it is of the much sought after Helen of Troy (she, who instead of suffering the indignity of abduction, chose to elope of her own accord!), who is immortalized by the bards of the West. In Christopher Marlowe’s unforgettable lines: Was this the face that launched a thousand ships,And burnt the topless towers of Ilium?Sweet Helen, make me immortal with a kiss. . . .

But seriously, do we not need to redefine our ‘goddess’ image? A goddess, one might be inclined to argue, is more likely to be the one who bestows the boon of immortality on a mere human with (or without) a kiss, rather than the one who displays all the clinical symptoms of that malady without a cure, the classic Sita Syndrome—characterized by an ordeal by fire, followed by a chilling banishment back to the forest, before the fatal disappearance into the bowels of the earth!