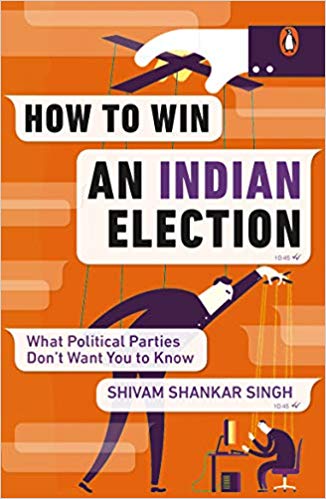 Shivam Shankar Singh’s How to Win an Indian Election is an insider’s candid narrative of how political parties leverage voters’ data and digital technologies for political campaigning. Singh headed data analytics and campaigns for the Bharatiya Janata Party (BJP) for the Manipur and Tripura Legislative Assembly elections under the guidance of the party’s National General Secretary, Ram Madhav.

By sharing insights from his journey as a former BJP data and campaign analyst, Singh spotlights the scale, impact and consequences of digital campaigning for micro-targeting citizens to influence voters. It makes you understand, to some extent, the role of data and new age technology in the recently concluded 2019 General Elections, which saw the BJP grab a landslide victory.

The book starts with an optimistic look though. It starts with the vision of a young, passionate Singh who desires to do good for his country. He sees much value in returning to India from the US—for the LAMP Fellowship—to serve his country by engaging with Members of Parliament on policy matters. This fellowship phase in his life and career is marked by the ‘obsessive desire to learn about the Indian political landscape and the people who populate it.’ After the fellowship ended, Singh joined the Indian Political Action Committee (IPAC), a company run by political strategist Prashant Kishor who had managed Narendra Modi’s Prime Ministerial campaign in 2014. Kishor backed campaigns that had a leading face. He believed this approach connected with the public well and thus more marketable, especially in a country where citizens want to follow a supreme leader. At a time when India was beginning to grow tired of Congress nepotism and corruption, it only made it easier for Modi and his team to present the persona of a much needed leader for the country. Singh learned much under Kishor’s leadership before moving to work directly for the BJP under the guidance of Madhav. Here, he realized that there is no one-rule-suits-all strategy to find success in politics.