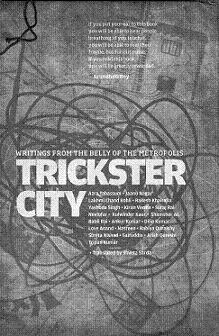 Trickster City is an extraordinary collection of stories, anecdotes, observations, biographical fragments about arrival, about belonging, about identity and about the fragility of existence. It is about a Delhi that is known and yet unfamiliar. Moving away from the easily recognizable, historically rich and elitist neighbourhoods, which most books about the megapolis focus on, it describes the underbelly of the city, its suburbs, the unauthorized and resettlement colonies which have mushroomed all around the frayed and constantly shifting edges of the city. The narrow lanes and crowded mohallas of these colonies are also home to many of those who provide the services without which the city cannot function, the young couriers, the butchers, the waiters, the scrap dealers and many others who are anonymous yet integral to the lives of most of the citizens of Delhi. This is a parallel universe, vivid, real and varied which is portrayed in all its complexity honestly and unapologetically.

The narratives, brief and unembellished for the most part, are written by young authors who live in these teeming, populous areas which often have a tenuous almost ad hoc existence, waiting for the Damocles’s sword of demolition to fall on their heads. The stories are gritty and real and the section entitled ‘Eviction’, written by various authors, finds its common thread in their portrayal of the uncertainties of life in one these colonies. Nangla Maanchi, which was in existence since 1979 was finally demolished in August 2006, with many of its residents being moved to a new resettlement colony of Ghevra. This section is a collection of vignettes depicting the miasma of fear and uncertainty which hovers over the colony once its fate is sealed by unknown, faceless powers as well as the minutae of life lived in such precarious circumstances. There are the bundles of precious household goods lying around in the dust watched by indifferent policemen, the discussions, the rumours, the wily scrap dealer who makes a killing as people are forced to dismantle their homes, the PWD worker who is a little unnerved and troubled by his work cleaning up the debris.
These shabby little dwellings have offered shelter to some of those migrants who stream hopefully into the city everyday,