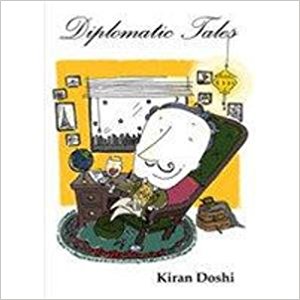 Was there ever a diplomat that didn’t wield, A pen so deft it could normally yield A tome on topics as varied as politics or gastronomy, Or the limitations on ambassadorial autonomy? Kiran Doshi has surpassed in verse, Subjects on which one would normally be terse The question is, will it be understood Beyond the civil service brotherhood?

In the interest of full disclosure, let me declare at the outset that I am a diplo-brat, the child of an ex-foreign service officer. So it was with some interest that I gravitated towards Kiran Doshi’s Diplomatic Tales (whoever said Indians love to navel gaze was spot on). If the book’s back flap was any indication of what lay between its pages, this was going to be a tickler. ‘Few writers have ever done violence, To the IFS code of diplomatic silence; Three-volume memoirs in turgid prose, Are too often all the public knows.’ Indeed, Diplomatic Tales is a hilarious and clever take on life in the diplomatic service.

That Doshi, a former diplomat who served all across the world, put pen to paper is not new – a number of noted ex-bureaucrats have written fiction – but what makes Diplomatic Tales an accomplishment is its verse form. The entire book is written in iambic pentameter, in the tradition of Vikram Seth’s Golden Gate. Doshi’s humour is wry and tongue-in-cheek, his potshots at our babus not too far off the mark.

Unfortunately, attention deficit syndrome got the better of me somewhere after the fiftieth page, and I, er…sort of lost the plot. This is the drawback of writing an entire novel in verse. While Doshi’s writing skills are much in evidence, the very form that he chose to express his thoughts act as a deterrant againt reader engagement. The characters are one-dimensional, the plots meandering and sometimes hard to follow. Rhyming is great for rap music, and poetry, but novels and short stories usually fall short in retaining interest.

In fairness to Doshi, he probably wasn’t trying to accomplish a literary tour de force. This is a tongue-in-cheek, jaundiced view of the Foreign Service, and many an ex-diplomat will laugh their guts out at the portraits he paints. Diplomatic Tales is, ultimately, an insider’s take on the ultimate insider’s club. Beyond the humour are some subtle, and not so subtle, jabs at the malaise that plague this great nation of ours, including a lazy media content to feed off the drivel fed to them by the Government. ‘And the rubbish that our newspapers fart, Is enoug to break anybody’s heart. They are worse than even us diplomats; They don’t even take a stab at the facts.’ Ouch.

Characters like Sinh, Potty, Mrs. Gool, Akhbar Swell or the Nawab of Khwab keep the momentum going, as larger than life cariactures. They arefunny yes, but to a point. As was said about Doshi’s first novel, Birds of Passage, while well received, was that its humour might lack broader appeal. Alas, the same criticism might be levelled at Diplomatic Tales, for while this reader was wildly amused and giggled at the many shenanigans of the mandarins that run riot across South Block, others less familiar with the trials and tribulations of civil service-dom might not pick up the jokes. This is a ‘friends and family’ book. Pick it up if you are a friend to diplomats, related to one, or interact with them on a professional level. Otherwise, you, dear reader, might lose the plot like I did (despite meeting two out of these three criteria).

Gayatri Rangachari Shah is the Features Editor – Hello! magazine and based in Mumbai. A graduate of Columbia University School of Journalism, Gayatri meandered her way into the field after a long flirtation with finance (and a brief spell as a British civil servant), before she found her metier. She has an unhealthy obsession with politics, world affairs, pop culture, fashion, all things French and New York City.