Dimensions of the Legal 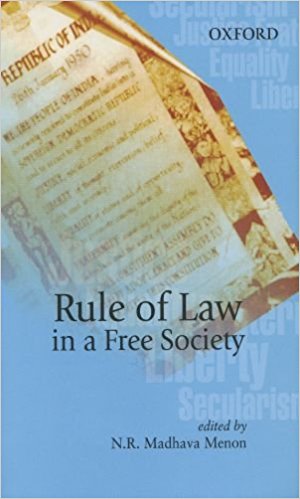 This collection of eleven essays, based on lectures organized by the Nehru Centre, analyse different dimensions of rule of law. Despite the book’s title most of the essays deal with the Indian experience while drawing from developments in other parts of the world. The concept of rule of law as has developed through centuries is often difficult to comprehend as it means different things to different people. Often described as ‘an unruly horse’ it has nevertheless been a fundamental principle in good governance. As Menon points out in his preface, the key determinant in the continuance of rule of law is the provision of adequate safeguards against the abuse of power. This check and balance of the executive is provided by a scheme of limitations of power including freedoms guaranteed to the citizens and the separation of the executive and the judiciary.

In the Indian context, in addition to separation of powers between the various branches of constitutional institutions, the existence of judicial review of executive action provided under the Constitution ensures that power is exercised within the limits of law. Sadly enough these structures are proving to be shaky and the rebuilding of their foundations seems an uphill task. The essays raise these concerns and try to find some answers.

Certain common concerns are raised by most of authors. Prominent among them is the corruption and criminalization of politics that the authors see as major impediments to good governance. Except for three essayists all others belong to the field of law. There is thus a greater focus on issues concerning the judiciary and the legal system.

The essays are divided into three parts. The first part deals with the concept and relevance of rule of law. Soli Sorabjee traces the development of rule of law through judicial precedents and links it to the process of globalization. ‘There cannot be a fair process of globalization unless it is accompanied by an effective rule of law structure and is made subject to its discipline’ (p. 7). He argues that since multinational and transnational corporations in the wake of globalization have become dominant economically and politically they should be described as state actors. P. Chidambaram addresses the difference between rule of law and rule by law. ‘Under rule of law, howsoever high you may be, the law is above you while under rule by law, a small section of the people arrogates to itself the power to rule. That section remains above the law, bends the law to suit its needs or brazenly breaks the law if it is necessary to achieve its own ends’ (p. 21). G.E. Vahanavati traces the development of law through judicial precedents which define certainty and bemoans the fact that many judges today do not wish to be bound by precedents. Justice K.T. Thomas’s essay on the Constitution of India and the rule of law takes us back to the days before the Emergency and to the politics of the then government that went on to supercede three judges for the post of the chief justice of India merely because they held in Kesavananda Bharati’s case that the Constitution and not Parliament was supreme. When the superceded judges resigned, the government filed a review of the judgment. However, the new bench of thirteen judges reaffirmed the view. The contribution of this judgment to rule of law can never be undermined.

The second set of essays deal with rule of law and institutions of state. Menon examines the role of the legislature, executive and the judiciary in relation to maintenance of rule of law and provides an assessment of institutions such as the Election Commission and the Human Rights commission. V.K. Saraf reflects on the politician-bureaucrat nexus and explores the role of judicial control of administrative action in maintaining rule of law and pleads for public activism at various levels. Centre-state relations in terms of legislation, finance, executive and administra-tive relations as well as resolution of disputes are critiqued in Justice J.S. Verma’s essay in rule of law and inter-state relations. Justice M.N. Venkatachaliah traces the evolution of the idea of rule of law, and locates it in the concept of legality. His essay also addresses the perennial debate of parliamentary supremacy in relation to judicial review.

The third part of essays deals with threats to rule of law. Corruption according to N. Vittal is like AIDS (p. 132). ‘AIDS comes out of uncontrolled sexual behaviour, corruption is uncontrolled financial behaviour’ (p. 132). Such an unfair comparison notwithstanding, the author traces the roots of corruption in electoral politics but argues that it has pervaded every walk of life. ‘The average Indian pays in all a bribe to the extent of Rs. twenty-six thousand crores in ten sectors and the most corrupt sector turned out to be the medical profession’ (p. 144). He describes his own experience of naming and shaming public servants found guilty of corruption in his web site and the criticism and resistance that it met. The author’s experiences as chief vigilance commissioner find ample narrative in this essay. Prakash Singh’s essay is about the challenges terrorism poses to rule of law and the tensions posed between security concerns and human rights considerations. While providing an overview of anti-terrorist laws in the USA, UK, France and India the paper critiques the American treatment of Iraqi and Afghan prisoners. The essay does not examine the links between money laundering and terrorism and its impact on rule of law but provides examples of brutalities perpetuated by various regimes in the name of addressing terrorism.

While these ten essays address rule of law from the perspective of the politician, the bureaucrat, the lawyer and the judge, the last essay by B.S. Chimni takes a very different view and explores major developments in the international arena that have a great impact on the way the understanding of rule of law is developing today. Chimni addresses international relations and the rule of law. He argues that a new international rule of law is taking shape at the initiative of the developed world. ‘This new international rule of law is a function of a thickening web that is now engulfing global and national governance. There is a rapid evolution of international law with every aspect of international life, be it oceans, space, trade or environment, coming to be regulated by newly adopted treaties and/or soft laws. It is leading to a fundamental transformation in the nature of international system’ (p. 189). Chimni describes five features of this new international rule of law. The first is the relocation of sovereign powers from states to international institutions that poses severe limits on the independence of states. The second feature is the increased rights for transnational capital or the transnational corporate sector with no corresponding duties imposed on them. The third feature is that while capital, goods and services are now increasingly mobile, there is greater control over the cross-border movement of peoples. The fourth feature is a dominant understanding of ‘sustainable development’ which states that without intra-generational equity it will be impossible to achieve equity among generations. ‘Instead the foxes have been put in charge of the chickens. One result among many is that the environment issue is being used to impose non-tariff barriers against goods exported by developing countries’. (p. 192) The final feature is the attempt to redefine rules relating to the threat or use of force. The classic example continues to be Iraq. Thus according to the author, what is emerging is ‘an imperial system of International law’. How does one move away from such a system to one where there is a just international rule of law? Chimni’s essay is my favourite in this collection since it indicates the new challenges faced by states.

The book provides an overview of the concept and relevance of rule of law today. The collection offers a great range of perspectives since most of the essays are based on the individual experience of the authors who have had the opportunity to shape the development of rule of law in India. Discussions and writings on rule of law have been plenty. To that extent some of the essays are not very original since what has been written has been articulated earlier by the authors themselves in various fora and by others. Collectively the essays bring a fresh insight to the problems and challenges posing the constitutional institutions today.

Geeta Ramaseshan is an advocate practising in the Madras High Court and is a legal scholar.