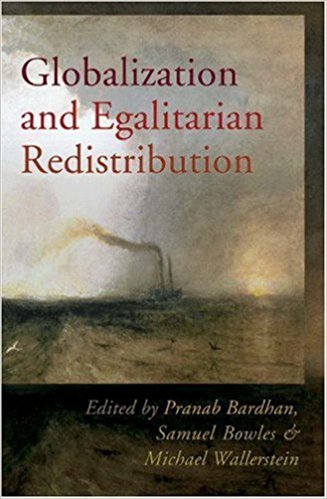 The relationship between globalization and redistribution has been a major bone of contention in debates on globalization. The more enthusiastic advocates of globalization view global economic integration as a welcome high tide that will lift all the boats and bring significant economic gains to everyone across the globe; on the other hand, the critics argue that large sections of the global population have been harmed a great deal, economically and otherwise, and inequalities have been exacerbated as a consequence of ongoing globalization. Of course, the relationship between globalization and egalitarian distribution has several aspects e.g. equity or otherwise between nations which may show a different trajectory compared to distributional outcomes within nations across, for instance, deciles of population, which in turn may be different from distributional trends across social and economic categories. Furthermore, both for conceptual as well as operational reasons, which particular variable (for instance, assets, income or consumption) ought to be given priority remains a controversial subject.

Yet other tricky considerations involve separating and measuring the impact of ‘globalization’ per se as distinct from other significant economic and socio-political factors. There is, as one may expect, a growing literature on these and related issues and it may be fair to say that there are few unequivocal answers to most of the questions. Nonetheless, it may not be off the mark to suggest that the most commonly used indicator of equality (i.e. income equality) has worsened during the current phase of globalization, and the gap between the two ends of the pole has tended to increase significantly. For instance, as per a well-known study by Milanovic (2007) the ratio of GDP per capita between the twenty richest and the twenty poorest countries rose from 54:1 during 1960-62 to 121:1 during 2000-2002. Sure enough, there is a handful of developing countries which have reduced the gap vis-à-vis the developed countries, the trend for most developing countries has been in the opposite direction.

As regards trends in income inequalities within countries, it may be difficult to find exceptions to the rule of growing inequalities almost everywhere. Deregulation premised on the magic of the market, lower taxes on high incomes, increasing integration of product markets as well as capital/finance markets across the globe and a host of other reasons organically connected with the economics of globalization have resulted in rapidly widening gap between the income of the profit earners/rentiers/managers of capital/other components of the elite and that of wage earners. The available evidence generally indicates that there has been a decline in the share of wages in Gross Domestic Product in almost every country across the globe (for a detailed discussion on this issue, see ILO’s Wage Report, 2009). To get a feel of the magnitude of such trends one may recall a couple of numbers. In the developed world, one of the fastest growing and the wealthiest countries, namely the USA, according to a recent estimate by Paul Krugman, between 1980 and 2007 the real incomes of the top .01 of Americans rose sevenfold whereas the real income of the median family rose only 22 per cent, which was less than a third of its growth over the preceding period of 27 years. To cite another illustrative number from the US economy, at the beginning of the 1970s, in General Motors, a company that was a national icon then, the Director’s salary was 88 times more than the average salary of its employees; as of 2007, in the famous retail sector giant Wal-Mart, which probably enjoys a similar cult status at the current juncture in the collective imagination of the US economy, the Director earned 1,300 times more than the average salary of its employees. To take another example, the Chief Executive Officer (CEOs) in the 15 largest companies in the United States were earning 360 times more than the average worker in 2003, and by 2007, this differential had increased to 520 times. Likewise, if one looks at the relevant trends in even a handful of countries often cited as globalization winners (e.g. China, India, Brazil, Russia, Mexico, Malaysia), the story is similar. For instance according to the official estimates of the Chinese government the Gini Coefficient for China increased from 0.224 in 1985 to 0.449 in 2003. In one the most comprehensive studies of global income inequalities by the ILO, which examined the relevant trends in 70 developed and developing countries, it comes out conclusively that the gap between the richer and poorer households had widened considerably between 1990 and 2005 (World of Work Report 2008, ILO). In sum, whatever may be the difficulties in mapping with acceptable exactitude different dimensions of inequality in the era of globalization, the available evidence indicates a worsening in this regard.