Decentring the Nation in Writing History 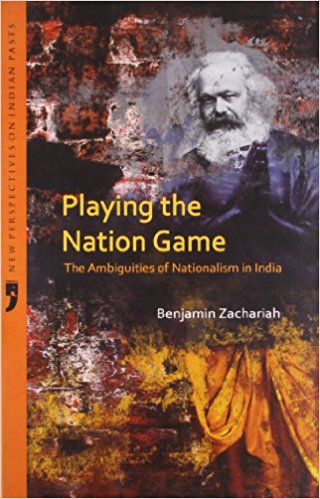 Decentring the Nation in Writing History
Malvika Maheshwari
PLAYING THE NATION GAME: THE AMBIGUITIES OF NATIONALISM IN INDIA by Benjamin Zachariah Yoda Press, 2012, 314 pp., 495
May 2012, volume 36, No 5

The question of the nation—its presence or absence, expansion or stagnation,exclusivity or everydayness, or its accuracy and ambiguity, has quite often rendered the concept difficult and unyielding. However, the extensive inquiries and the variety of propositions put forth by social scientists over time has made its occurrence and experience less threatening, more bearable and engrossing. Certain dominant ways of understanding the phenomenon that find their mainspring across disciplines and regions, which have been efficacious in the study of the Indian nation as well, illustrate sharply the academic discourses for containing and taming its manifestations. One important way of approaching the concept, the most dominant in social sciences, is to regard the nation as a form of identity that challenges other forms of collective identities like class, region, gender, race and religious community. While the ac-knowledgement to differentiate these identities remains relatively unquestioned, there is little consensus on the role of the ethnic, as oppos-ed to the political, components of the nation. Although national identities and loyalties often assume primacy over those of class, gender and race (religious attachments may at times rival national claims), national attachments can intermingle or oscillate in power and promi-nence with other forms of collective identities.