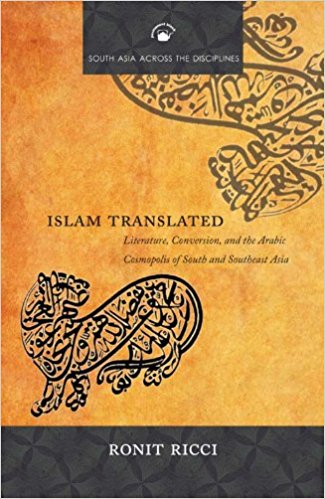 The question of the spread of Islam into areas far away from its place of origin continues to invite inquiries and curiosities. Multiple explanations offer how a religion starting off with a small tribal community in the lands of Arabia, expanded across the globe and eventually turned out to be the world’s second most followed religion and by some estimates the world’s fastest growing religion today. Two regions-South and Southeast Asia-that inhabit the world’s largest Muslim populations are all the more intriguing in this regard. Different networks such as travel, trade, and Sufi brotherhoods connected individuals and communities of these areas to each other as much as to the larger Islamic world and facilitated the arrival and expansion of Islam. Ronit Ricci, a scholar trained in comparative literature, seeks to emphasize the role of literature and literary networks as yet another path through which Islam spread and flourished in these two regions. As simple as it might sound on the surface, the book under review uncovers the intriguing nature of literary transmission and translation and the role they played in the process of religious conversion. The author thinks through how ‘literary networks connected Muslims across boundaries of space and culture’ and ‘helped introduce and sustain a complex web of prior texts and new interpretations that were crucial to the establishment of both local and global Islamic identities’ (pp. 1-2).